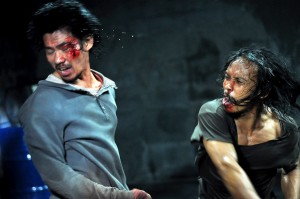 Gareth Huw Evans—easily the best Welsh action director working in Indonesia—showcases silat, a vigorous and idiosyncratic Indonesian form of martial arts within over ninety minutes of near-non-stop mayhem. An unprepared squad of young policemen is sent to clear out a Jakarta gangster’s lair, a tall, moldering fortress full of baddies and bad things. Evans says that he and his fight choreographers worked relentlessly on each scene, videotaping them until every gesture fit together. As in John Carpenter’s early “Dark Star” and “Assault on Precinct 13,” Evans draws on the sinister potential of confined spaces rather than sprawling landscapes. The production values are the spiraling battles and body count, and the indeterminate timelessness of the apartment building and its tropical rot.

Evans laughs at that characterization. “Luckily, most of it was a studio! So at least if it looked grimy, it wasn’t too bad to shoot.” While it’s 2011, it’s also 1992, it could be 1957, even. He nods. “One of the things we were very careful about is to have slight differences in the design of the architecture, so that we could maintain a sense of visual interest. So we had the atrium [site of an earlier ultraviolent shootout], we played around with darkness and light, high and low, how your eyes can adjust in the darkness to see things you wouldn’t ordinarily see. And trying to figure how going into different rooms gives you different textures. The few brief moments we ever go outside, it’s dangerous there. That idea that it’s almost more dangerous to be on the outside than the inside. You’re safer in the corridor than near a window, we wanted that feel.”

One extended battle continues in an unbroken shot with the camera rappelling along with a character through a hole in a floor/ceiling. “I threw the suggestion out to my DoP, and I was like, okay, I want to go through that hole. When we designed it, for me, it was a no-brainer. I had to go through the hole. I didn’t want to have a clunky transition from one room to the next, if we can drop through the hole with him, and carry on the choreography, then great, let’s do that. We couldn’t afford rigging, we couldn’t afford a proper rig to send the camera [through the hole in the ceiling] so we had one camera guy up on top and the camera’s on a Fig-rig [named for filmmaker Mike Figgis], a steering wheel, so he’s holding onto it, and he’s got a wire on his back and there’s a wire on the camera. So basically on ‘Action!’ the guy drops down, and the camera guy follows with him and falls onto the floor and then he pushes half his body out through the hole and turns the camera. Meanwhile, on the ground floor, we have my second DoP standing on a table. And he’s waiting, when it comes through and it twists, he grabs it, takes control of it then carries on. We did about ten, twelve takes to get it, but in the end we were really happy.”

It’s a lo-fi version of shots where a crane moves across a landscape and you’re gently aware of the operator getting off the crane and walking with Steadicam. “We did that!” Evans says, laughing “We did that in this as well! When the truck [of police] arrives [in the courtyard of the compound], right up above it, and the doors burst open and they all start getting out, the camera comes down and then we detached the camera from the crane, we had it on the Fig-rig, and then as he comes down, we take him off the wire to keep him safe, because he had to go right to the edge, we track along, we follow him back. We did it all in one shot. That was a dreadful shot to do! That, on a normal setting is hard enough, but we were dealing with the sun. The sun in Indonesia, it’s clouds on and off. So sometimes you’d get it exactly as you want it to look, but only for two minutes, so you do that one take, you reset, then you have to wait fifteen minutes for the sun to go under the clouds again. It’s such a long, long process every inch of the way. If we shoot it with the full sun, then we all of a sudden have the shadow of the crane straight across the floor. It was a big, big, big mess, that shot.”

Mike Figgis tweeted from the set of his current movie that long takes are elegant, great, but always be prepared to cut it into four parts if you can’t get it in time. “Exactly. Me and my producer, for that shot particularly, we were at that point, look, give me until two o’clock to get it, if I don’t get it by two o’clock, I’m splitting it up.” Still, Evans and his crew make it all look effortless, except for cleaning up the sweat and the fake blood. The sequel, which he’s about to begin work on, does sprawl across Jakarta: Evans says he has no intention of repeating himself.

“The Raid: Redemption” is now playing.