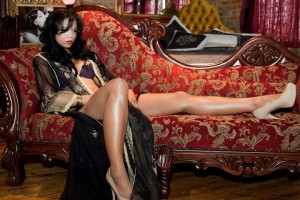 Film noir may have had its heyday in the forties and fifties, but it is no less entrancing on today’s screens. Hesperidian Productions roots their new neo-noir short “Stiletto” in present-day Chicago, a twenty-five-minute film that pays homage to noir while also aiming to create something new. “You can see all the roots [of film noir in the short], but it is something that people who love noir and have watched it extensively haven’t seen before,” says Kyle Thomas, president of Hesperidian Productions and director of “Stiletto.” “It’s really interesting being able to take that essence and then be unlimited to create something that expands upon it.”

The film follows Chicago district attorney Pete Davis while he attempts to find the necessary evidence to prosecute a pedophilic archbishop. Davis eventually turns to Selene, the madame of a high-end brothel, for help. “Selene is the femme fatale. She was the first person in the story that came to me and she is actually what I based the story on,” says Thomas. “It was a place of power that we could put this femme fatale [in] and still remain true to the genre.”

Jane Morson, the executive producer of the short film, found the perfect brothel location in the city. “The location we found was modeled on the most famous brothel in Chicago history,” says Morson on “The Everleigh Social Club.” “There was a mix of exposed brick and Victorian furniture. It had a nice mix of elements of time, which was what we were trying to do with our plot.”

Thomas notes the whole company was drawn to the idea of making a noir to follow their short “Awakening,” which Morson refers to as their branding piece. “I really connect with noir as a genre because I’ve always been interested in mythology and classic archetypes,” says Thomas. “Noir takes those ideas and brings them into a more urban setting, allowing people to investigate ideas of humanity, power struggles and applications of justice.” 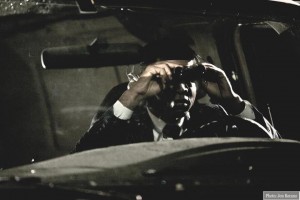 Hesperidian is a newer company, but one that Thomas had been conceptualizing for years. The company places a heavy emphasis on collaboration between various artistic disciplines. “Film uses fashion to make a statement and music to enhance the visuals… I wanted to mold all these pieces together using professional talents,” says Thomas.

Thomas, who is a Wisconsin native, relocated to Chicago in order to make his own path instead of joining the masses in Los Angeles. “There’s a lot of talent [in Chicago] and sometimes that goes unnoticed in film,” says Thomas. “I wanted to bring together people that were just as passionate about the vision as I was… ultimately creating pieces of art and products that people can connect with.”

“Stiletto” will be Hesperidian’s second production and, like the company itself, Thomas has had an active role in its conception and execution. “I directed it and weaved all those pieces together, as well as editing it,” he says. “I saw it from the beginning as an idea, as a seed, and then I followed it all the way to the end.” (Kristen Micek)

“Stiletto” has its Chicago premiere  at the Portage Theatre on March 30. General admission is free and the doors will open at 8pm. A VIP reception for $20 begins at 7pm.