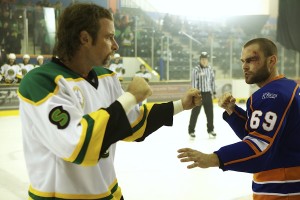 Doug Glatt is a pitiable dolt who goes from nondescript bar bouncer to minor league hockey goon. In the gleeful “Goon,” this simpleton makes an incremental step toward accepting his inadequacy. Seann William Scott (“American Pie,” “American Pie 2,” “American Reunion”) plays Doug, partly inspired by the Doug in the 2002 book “Goon: The True Story of an Unlikely Journey into Minor League Hockey.” The film “Goon” is a bracing comedy at his expense that makes no excuses. The goodhearted bruiser of this bildungsroman gets the girl who tells him: “you make me want to not sleep with a bunch of guys.” Three Canada natives–director Michael Dowse (“FUBAR”) and co-writers Jay Baruchel and Evan Goldberg (co-writer of “Pineapple Express,” “Superbad”)–package this ambiguous apology for bloodsport. I like the way they almost mock the idiots on the ice and their fans in the stands. (Referees, law enforcers, team owners, broadcasters and advertisers are innocent of all charges.) “You’ve been touched by the fist of God,” marvels Doug’s coach. Baruchel also plays Ryan, a gay motor-mouth jester and off-color commentator who is Doug’s number-one enabler. When Doug is asked what number he wants on his jersey, Ryan tells him to pick “69.” For a populist touch of some sort, onscreen stats list the populations of the cities where Doug, an incompetent skater, goes to bust heads with brio. The numbers that really count are his amassed penalty minutes. “Violence is killing this sport,” stated the coach-player played by Paul Newman in “Slap Shot” (1977). His lackluster Charlestown Chiefs, like the Halifax Highlanders that deploy Doug as an “enforcer,” score with fans only by bloodying opponents. Reversing himself, Newman’s character decided to play his last game “straight.” A stunt with a jockstrap indirectly won him that championship, though, not fair play. “Goon” exerts no brain cells to rethink its black eyes, purple bruises and busted teeth. More thought is found at hockeyfights.com where fans review scraps and vote “Season Awards.” A thread dedicated to the proposition: “Goons are hurting fighting in the NHL” notes: “In today’s game it is rare to find a team that displays true team toughness.” Down with specialists like Doug “the Thug,” urges a purist. “I think the NHL needs to get away from having a small group of players do all of the fighting, and return to the days where everyone had to be tough to play hockey.” With Alison Pill, Marc-André Grondin, Eugene Levy, Liev Schreiber. 91m. (Bill Stamets)