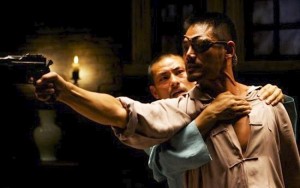 Chow Yun-Fat stars in “Let The Bullets Fly,” (Rang zidan fei), a winning, mischievous 1920s-set Chinese action-comedy screwball western that became that country’s highest-grossing film ever in 2010. (The boom in theater construction in China doesn’t hurt record-breaking returns for local films.) Actor-director Jiang Wen (“Devils on the Doorstep,” 2000) co-stars with Chow as one of two crooks who descend on Goose Town, a tiny town in the wilds of China. Provincial politics provide some of the ample banter and complicated plot twists. Yet there’s a generosity in its large-scale stunts and mix of high and low humor that you’d never find in humorless American movies like “The Green Lantern.” Wen’s film is sometimes poker-faced, but it’s usually in service of a wink coming down the pike. Gunfights and swordplay are leavened with a generous helping of absurdism. The muscular images are courtesy of cinematographer Zhao Fei, whose work includes three films for Woody Allen, including “Sweet and Lowdown.” With Carina Lau. 132m. (Ray Pride)