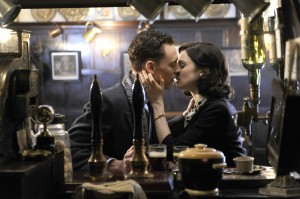 The great British filmmaker Terence Davies returns with a Terence Rattigan adaptation that suggests the past is a pained place of desire, of regret and of tracking shots that are as spontaneous and unexpected as a dance number in a musical. It’s a few years after the War, and at the age of forty, Hester Collyer (Rachel Weisz, fiery, tremulous) leaves her life of privilege with her lawyer husband, Sir William Collyer (Simon Russell Beale, warm, concerned, genteelly solicitous) for passion with Freddie, a younger man, a tempestuously alcoholic ex-RAF pilot (callow, bumptious Tom Hiddleston). Bleak wallpaper and crushing emotions follow. Davies is one of the great, lyrical poets of the cinema and one of the tragedies of film in the past couple of decades has been his inability to find finance for his projects. (At the age of sixty-six, he’s set to make another movie straightaway.) Movies like “Distant Voices, Still Lives” (1988) and “The Long Day Closes” (1992) are filled with unforgettable images and passages that go far beyond mere drama, tactile impressions of sensations, of time passing, of time itself stopping, pausing, reflecting. Abiding sorrow is also a constant in Davies’ films, and Hester’s midlife coming to romantic awareness is both melancholy and melodrama. (In the good way.) There are moments in Davies’ work where the images pulse with color, often-rigid yet plainly magnificent compositions, and a rich use of shadow that only the greatest painters achieve on canvas. Davies admires artists like Turner and Jacob van Ruisdael, but Vermeer is his great touchstone, even in the dark reaches of “The Deep Blue Sea.” In an interview with him several years ago, Davies exclaimed, “Natural light falling through a window, there’s something ravishing about it. It’s just ravishing!” And so is his sense of the capacity of the human heart. 98m. (Ray Pride)