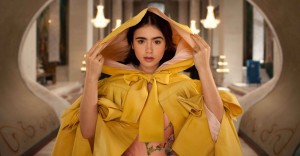 Director Tarsem Singh Dhandwar, who once billed himself as Tarsem, concocts a splendid fairy tale that winks with gentle wit. “Mirror Mirror” bears his signature flourishes of the fantastic. Key to the bewitching mise-en-scène is costume designer Eiko Ishioka, who died in January, and who worked on Singh’s earlier “Immortals,” “The Fall” and “The Cell.” Her other costuming credits include “Bram Stoker’s Dracula” and the Opening Ceremonies of the 2008 Summer Olympic Games in Beijing. Charming Prince Alcott (Armie Hammer, “J. Edgar”) at a royal ball, Snow White (Lily Collins) earns the enmity of the Queen, her villainous and vainglorious stepmother (Julia Roberts). In a kingdom where everyone sang and dance once upon a time, her reign and taxes ruined all that. She issues an order to murder the eighteen-year-old princess, but Snow finds refuge in a white birch forest with a gang of bandits. True to their thieving calling, the dwarfs steal many a scene. They tutor her in their wily woodsy ways and soon she is leading usurpers to topple the illegitimate Queen, whose one-percenter statecraft includes quips like “Commoners love a good metaphor.” Roberts plays an ironic narcissist several notches less cruel than Tilda Swinton’s White Witch in the two episodes of “The Chronicles of Narnia.” All her blackhearted magic will backfire and her imperious visage wrinkles horribly. Curiously, one feature of the Princess is unchanged: her eyebrows look like two dozing caterpillars of the woolly mammoth variety. Even in the end credits where she stars in a Bollywood song and dance number. With Nathan Lane, Robert Emms, Mare Winningham, Michael Lerner, Mark Povinelli, Jordan Prentice, Danny Woodburn, Sebastian Saraceno, Ronald Lee Clark, Martin Klebba, Joe Gnoffo, Sean Bean. 106m. (Bill Stamets)
“Mirror Mirror” is now playing.
Ray Pride