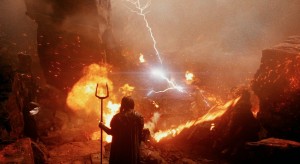 Perseus, a demigod in denial, undertakes a perilous journey to get something he needs to kill something else and save the world. That’s the plot for both “Clash of the Titans” (2010) and the new “Wrath of the Titans,” set ten years later when Perseus is a single dad. Titans, the mythological offspring of Uranus and Gaia only appeared in the first film as a mention in opening narration. But the second concocts one Titan, the 1500-foot-tall Cronus, for a climactic mega-clash. Befitting this 3D sequel, there’s another visual multiplier: instead of three blind cackling witches passing around a single detached eyeball, now we are offered three lumbering Cyclopes. Aussie action fellah Sam Worthington returns as the conflicted offspring of a mortal and an immortal. “Being half human makes you stronger than a god, not weaker,” counsels his father Zeus (Liam Neeson). Patricide, filicide and fratricide abound. Disbelievers worship less, thus depowering the Olympians. (Did you know that when you pray to gods, it’s like using your cell phone? They can track your location. Really.) Polytheism continues to decline. Secular humanism is coming soon. “Wrath of the Titans” may lack the engaging CG-geography of the the 2010 film, but check out the tactical insertion of the Spear of Triam, somewhere between the lower esophagus and the upper intestines, into a recent escapee from the impregnable prison of Tartarus. Jonathan Liebesman (“Battle Los Angeles,” “The Killing Room”) directs with generic gusto a mytho-philic screenplay by Dan Mazeau and David Leslie Johnson. With Ralph Fiennes, Rosamund Pike, Bill Nighy, Edgar Ramirez, Toby Kebbell, Danny Huston. 98m. (Bill Stamets)

“Wrath of the Titans”  is now playing.