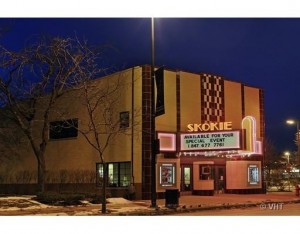 Gorilla Tango Theatre, best known for its nerdy burlesque shows, is expanding beyond the stage with a new film branch, Gorilla Tango Motion Pictures (GTMP). Gorilla Tango also recently purchased Skokie Theatre, where the company plans to both screen its films and add more showings of its theater performances.

“We have these shows that are a big success, but a tour is very difficult and cost-wise it doesn’t always make sense,” says Gorilla Tango founder Dan Abbate. Film was an appealing option, he says, because it is “inherently distributable.”

The new facet of the company began with a beta run this past October, using feedback from the test run to revamp their approach. “Originally, we were thinking that we would work with outside production groups,” says Abbate, “Now, we’re planning to act more like a studio.”

He adds that they want to be involved from the initial concept to the first ticket sale.

“There was a panel at SXSW that had kicked around the phrase referring to projects producing ‘intelligent popcorn.’ Pictures that studios won’t do because they aren’t tent-pole films,” says Derek Mungor, executive producer at GTMP. “We want to create something entertaining and still reach a large audience.”

“What gives us a distinct advantage is that we have the experience and infrastructure to actively market a particular project after it’s done,” adds Abbate.

Their process for picking and choosing films will be evaluated on a case-by-case basis. “For the most part, a lot of our content will come from creative heads through this company or the theater as a whole,” says Abbate. Still, he says they’re open to working with outside producers.

“I think, if anything, we’ve opened to a wider talent pool,” says Mungor. “We’ve opened up to the theater crowd that wanted to expand to film, but didn’t have the outlet.”

When asked if they had a specific market they are aiming for, Abbate says they don’t at this point. “The trick with what we’re doing, which is what we did with theater, is we talk about what is marketable,” he says. “What stories are going to connect with a specific market.”

“We need to be looking at the next five to ten years of independent films,” says Mungor, “With the advantage of Internet distribution, many filmmakers are making their own content. It’s just about finding ways to make it successful.” (Kristen Micek)