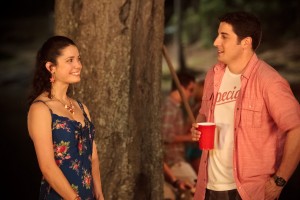 Intermittent strangeness and goodheartedness are the most appealing characteristics of “American Reunion,” a sequel willing to throw out the idea of a thirteen-year high-school reunion without bothering to make even a cursory explanation why. (The real reason, of course, is that “American Pie” came out in 1999.) As written and directed by Jon Hurwitz and Hayden Schlossberg (“Harold & Kumar Escape From Guantanamo Bay”), the underlying sentiment that these characters can have their life transformed by a little bit of sexual reciprocation is optimistic and even healthy, even if the gross-out gags gross out in largely familiar ways. (Cf. blood, shit, dicks, a comely topless eighteen-year-old woman on her eighteenth birthday, more shit, vaginal juices, Stifler’s mom, conveniently placed flutes.) Seann William Scott’s Stifler is the movie’s distraught center, and Stifler’s feral forward motion into rude brute anarchic senseless damage grows on you, like the mad jittering and juddering of the little guy in “Lilo and Stitch.” (Or maybe he’s the gopher from “Caddyshack” afoot in human form.) Several members of the original cast merely show up, including Mena Suvari, Natasha Lyonne and Tara Reid. Reid stands in place as little nods to her life offscreen slide off her inexpressive features; Lyonne Eve Ardens her brief moment away with verve. If the studio wants to make another, they ought to do it in dog years, like Michael Apted’s “Up” series, with a Bergmanesque folly to look forward to, made by the original directorial duo, the now-more-serious Paul and Chris Weitz. With Jason Biggs, Alyson Hannigan, Chris Klein, Eddie Kaye Thomas, Ali Cobrin, Neil Patrick Harris, Jennifer Coolidge and an ever-pliant Eugene Levy. 113m. (Ray Pride)