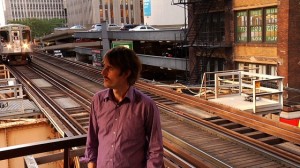 Of a dozen or so features I was able to sample from CIMMFest, the Fourth Chicago International Movies and Music Festival—playing this year at the sparklingly renovated Logan Theater as well as the Wicker Park Arts Center and Society for the Arts—Silvia Beck’s process doc, “Nyman in Progress” is a delight, following the composer puttering through his cluttered-to-collapsing studio as well as traipsing the world performing his music. “The energy comes in through my front door and my windows,” he says, saying he’s as content at home as on the road. But we also see Nyman combining his music with video images he’d collected randomly for years, for gallery consumption. DJ Paolo Campana’s winsome “Vinylmania” tours the world for evidence of the ubiquity of vinyl lovers, his Italian voiceover charming as much as the emphatic connoisseurs he collects and his quest to find how records are stamped and turntables designed. Jesse Vile’s affecting, heartening “Jason Becker: Not Dead Yet” follows the life of the virtuoso guitarist for more than twenty years after his diagnosis at nineteen of Lou Gehrig’s disease, or ALS.

Of local note is “Ganzfeld,” Brian Torrey Scott’s fiction feature about a Chicago couple whose life together is ill-starred, but who are surrounded, more successfully, by an affecting chorus in the form of a band featuring Azita Youssefi and Marvin Tate, performing songs by LeRoy Bach and Jeff Harms. A more successful blend of music and narrative comes in Takahiro Miki’s “Control Tower,” charting a fleeting romance between a teenage boy and a transfer student in a frozen Japanese city. Work-in-progress “Parallax Sounds” by Augusto Contento contrasts a gold-flecked perspective of Chicago locations with the city’s independent-minded music culture since the 1990s, with comments by Steve Albini, David Grubbs, Damon Locks, Ian Williams and others. As Albini puts it in the film, “It was an incredible collection of people. There was a criminal element, there were drug dealers, there were hustlers. The unifying characteristic is that they were unwelcome elsewhere; they were real fuck-ups, total disasters in the straight world. In the punk scene, all these different kinds of people, immigrants and faggots and criminals and intellectuals and people who were slightly insane, all these people came together and were able to create stuff that was really beautiful and powerful.” The supple score is by Ken Vandermark, who also appears. (Ray Pride)

The complete program, locations, musical attractions and other details are at cimmfest.org. A trailer for “Ganzfeld” is below.