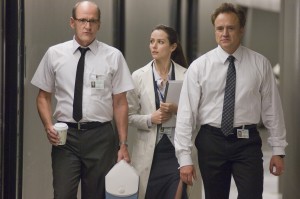 There’s a weave of wicked play in “The Cabin in the Woods” that makes it tough to describe without giving away the game. Although the most recent commercials do indicate some of what’s afoot, they’re more tease than giveaway. The studio’s synopsis reads: “Five friends go to a remote cabin in the woods. Bad things happen.”

Let’s see… Drew Goddard’s directorial debut, co-written with longtime colleague Joss Whedon, is about what’s under what’s in the basement and what goes on under that? Talking to the extremely affable and extremely tall Goddard recently, I suggested this comedy-horror-puzzle could honorably earn a three-word review from someone who didn’t want to give away too many particulars. “What. Th’. Fuck.”

“I like that,” he says, laughing, as I’m sure he must have in interviews published after its debut in March in Austin at that social networking epicenter, South by Southwest. I’m resistant ever to fill a piece with plot synopsis, I say, but this one’s tough. And you’re on a publicity tour for something the great pleasure of which is knowing zilch-o. “I guess. It’s not like when I go to a movie I want to know all of the things that happen in a movie, either, even if it’s just your average romantic comedy. I’m just looking to hear the other things. I don’t think that we’re that different. I don’t think reviews go out of their way to spoil the whole movie in any scenario. It’s a hard one to talk about—the less you know, the better—but isn’t that true of all movies?” 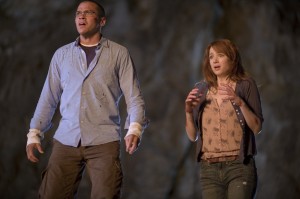 I saw “Cabin in the Woods” almost back-to-back with the other current release from Lionsgate, “The Hunger Games.” Weirdly, thematically, there are similarities between the fate of the college kids in the titular cabin in the woods and in the children of that runaway hit. Things happen for a reason, and for an ostensible greater good. “Cabin in the Woods” is playful, but it’s more a moral Rubik’s Cube than merely an in-jokey, fanboy meta-meta mindfuck. “For sure. Quite frankly, if we found ourselves being too in-jokey [about the genre], we’d cut it. We didn’t want it to be this sort of mash-up just for people in the know. Certainly, the more you know about the horror genre, there’s stuff in there for you. But first and foremost, it was just, tell a story.”

The writing process must have been a case of Goddard and Whedon just making each other laugh. The result seems to have made for an ideal collaborative effort. “Very much so. So much of the movie is just Joss and I trying to entertain each other. That was how this came to be. We didn’t pitch it anywhere, it wasn’t like a movie we developed, it was just the two of us sitting down to write something fun. It was like let’s not worry about quadrants and market testing and things like that; let’s just write what we want to watch. It’s a basic thing that sounds so simple. If you talk to a kid who’s eighteen, they’re like, yeah, that’s what you do, you write what you want to watch, but you get older, it gets harder and harder to do and you have to fight to do these things.”

Crisp dialogue with sinister undertones, and later, an ominous one, marks the movie. There are observers, supervisors, controllers of the fates of the film’s characters. One jokes, “Remember when you could just throw a girl in a volcano?” which is met by “How old do you think I am?” It’s very funny, between two fine actors, Richard Jenkins and Bradley Whitford, but it’s also a mystification of just what the heck is going on. “That’s the point where, at least for me, the movie starts to signify that, oh, this isn’t just about current times or horror movies, we’re also expanding to talk about bigger things.”

And also the opportunity to give Jenkins an epic aria of an outburst that only begins, “Fuck you. Fuck you! Fuck you! Fuck you.” “My favorite day of shooting, that was probably my favorite day. I made him do thirty takes of that just because I was enjoying it so much.” And I can imagine him saying, do you want another one, just for safety? “That will be a great DVD extras, just to see how you can take those two words and make entirely different stories out of it!”

The nightmares of the subconscious and our culture’s way of dealing with them erupt in a very specific visual way late in the film, and it’s like a charnel house of development deals gone wrong. A raft of rampaging id monsters are loosed in very specific and colorful and bloody and even comic ways. And the watchers watch. (A lifelong fascination with cruel, primitive gods always helps.) Goddard says this part of the movie comes from his childhood. “I grew up in Los Alamos, New Mexico…” Oh, dear. “Yeah, exactly. All my friends’ parents—the whole town just exists, to make weapons. So much of the downstairs of this movie was influenced by the guys in their white shirts and black ties, just going out and doing what they believe, sincerely, they are doing to make the world a better place. But at what cost?”

“The Cabin in the Woods” opens Friday.