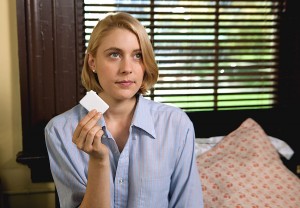 “Damsels in Distress” may be one of the most charming and memorable movies I’ve ever seen that also plays as if the filmmaker had no experience whatsoever in making feature films. Whit Stillman has littered the pages of an eager press with his tales of his time in the wilderness, writing ambitious scripts for films that were never made, set thousands of miles from the home turf of his first three films, “Metropolitan” (1990), “Barcelona” (1994) and “Last Days Of Disco,” which began his public silence as a filmmaker in 1998. Expatriate days. Failed romances. It’s a much more cleanly told story than “Damsels.” Plot strands flutter, in need of pruning, jokes that ought to be set up appear as if from nowhere, and slow fades to black end many scenes more by default than design. Yet its daffy, otherworldly story, rehearsing but not rehashing Stillman’s frankly reactionary instincts, resounds less for its charming gaggle of collegiate women than for its dramatization of self-deception and the despair of depression. Greta Gerwig’s Violet is at the center of a trio of women who want to bring elevated hygiene and lowered expectations to an uncaring world. At the fictional Seven Oaks College, filmed largely on Staten Island, sidekicks Heather (yes, Heather, played by diminutive interrobang Carrie MacLemore) and Rose (Megalyn Echikunwoke) are augmented by a transfer floral scent, Lily (wide-eyed and too-cute-for-school Analeigh Tipton). Gerwig brings her customary panache with wafts of words to Stillman’s talk. On the surface, Violet is a snip and a snot. “The tendency, very widespread, to always seek someone ‘cooler’ than yourself—always a stretch, often a big stretch. Why not instead find someone who’s frankly inferior? It’s more rewarding and in fact quite reassuring.” Yet as the story progresses, Violet recedes, even disappears for a time, doubting herself, then transforming herself through an epiphany over soap from the “Motel 4” where she’d hidden way. There’s another synethesic component with a male character, Thor, who claims never to have learned names of colors, and what begins as something dumb, dumber still in a digitally shot film bursting with bold shades, hues and ladies’ finery, ends as an incredibly touching revelation involving a rainbow. (It’s a stunning instant, kapow and more.) Suddenly, the movie is more than Stillman’s verbal hues and cry. But we’re still in for instruction on an “international dance craze” that could enhance “the life of everyone and every couple,” the less said of which, the better. Adam Brody, Hugo Becker, Ryan Metcalf, Billy Magnussen, Aubrey Plaza, Alia Shawkat.  99m. (Ray Pride)