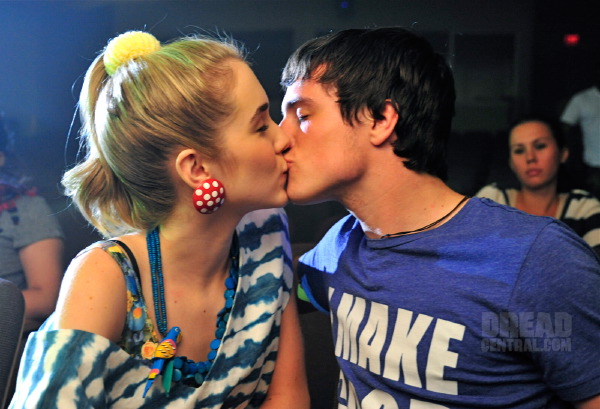 “Does this sound fucking PG-13 to you?”Joseph Kahn’s megameta nihilisploitation genre maelstrom, “Detention,” gets an A+ if only for its endearing ADDDDDDDDDDDDDDDDDD. Suspended from the armature of high-school movie memes, horror and otherwise, Kahn and co-writer Mark Palermo flaunt the entrails of movies from “Back to the Future” to “Breakfast Club,” from “Prom Night” to “Donnie Darko,” nurturing an intense kinship to “Heathers,” and lifting from “Freaky Friday,” all careening at tender velocity. The veteran video director’s first movie, the motorcycle action yarn “Torque” (2004), reveled in the possibility of CGI effects now ruined by ubiquity, and attempted a pace since exceeded by Neveldine/Taylor with films like “Crank.” The kinship to N/T is not on the QT here. “We’re beyond midnight movie,” Kahn writes of his welcome follow-up, “We’re a 3am movie.” “Eyes. Glazing,” his heroine, Riley (the starkly physical Shanley Caswell, playing a self-described “loser” who could only become a splendid adult) says. (She’s also handy with early-Winona-styled intonations.) Shameless, relentless and exceptionally pleased with itself, “Detention” is kind enough to be cruel beyond measure, yet also to be generous with its multimedia mayhem. There’s a raft of video-style gimcracks in the onrushing slipstream, but the snap-crackle-and-skinpop is subcutaneous in speedy efficacy. 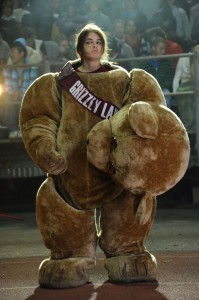 The main credits kick things into gear, where names of cast and crew are emblazoned on objects along the length of a heavily peopled high-school corridor, including Josh Hutcherson’s name taking the place of “Converse All Star” on the logo of his own sneakers as he skateboards into the picture. And a kiss that ends with a 1990s-obsessed teenager’s “You taste like Luke Perry”? And that same teenager is looked up and down and asked, “Could you look more like Sharon Stone in ‘Total Recall’?” (She could not.) A girl obviously in love with her best male friend hellos this way: “Clapton Davis, you are more concept than reality.” “Good taste is not a democracy,” nor are fleeting bad-taste references to Heather Mills, Osama Bin Laden and Heath Ledger. (It’s all too soon.) “Fuck. Everybody” is spoken out loud only a couple of times, but it seems the weary but so-called-life-giving under-the-breath undercurrent of the entire film. One character’s “Gosh fucking darn it” is a fine neologism of a phrase that fits the movie easily as well as “WT-Fucking-F?” Plus, there are at least two classy full-screen credits in the end crawl: “YOU HAVE BEEN WATCHING DETENTION” (Hello, Bob Altman!) and “MMMBop By Hanson.” With Spencer Locke, Aaron David Johnson, Parker Bagley, Alison Woods. 88m. (Ray Pride)