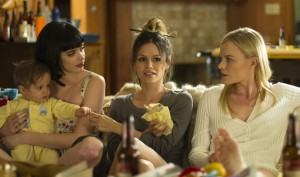 A lightly likeable effort at “Swingers”-meets-“Bridesmaids” (made, obviously, before that smash success), writer-director Kat Coiro’s “L!fe Happens” (note the minor explosion of cute punctuation) furrows into the about-to-burgeon genre movement of women writing women talking gaudily bawdy. (As a less naughty sample, “You’re having anony-sex with a guy we met in a Costco parking lot?” is a minor early gag as two of the roommates leave bedmates behind in search of condoms.) Three female roommates (Kate Bosworth, Rachel Bilson, co-writer Krysten Ritter) share sexual exploits until a one-night stand leads to single motherhood for one of the trio, who’s adamant about continuing to date even into single motherhood. The jokes fly fast, if not always furiously, and the Los Angeles local color is limited largely to interiors. Justin Kirk steals his scenes as the sole proprietor of some of the worst seduction lines in all Christendom. As the boss of a pet-walking service, Kristen Johnston is, as would be expected, leonine, loud and brassy and nigh unbearable. With Jason Biggs, Seymour Cassel, Fallon Goodson. 100m. (Ray Pride)