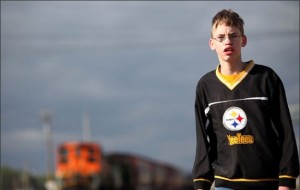 Visually supple and victim-centered, “Bully” is better than the good-for-you documentary it sounds like. Director-cinematographer Lee Hirsch taps into heartland and homeland tropes by choosing five families in largely rural locales in Iowa, Georgia, Mississippi and Oklahoma. Another telling choice is to largely omit the bullies, without making them the whipping boys and girls for a diagnosis of moral pathology. Hirsch digitally defaces one he caught in the act on a Sioux City school bus. (For his 2002 documentary “Amandla!: A Revolution in Four-Part Harmony,” he interviewed a death row warden and a former national head of riot police, whites who victimized anti-apartheid activists.) “Bully” is not like a documentary where the victims are abducted by aliens and the aliens do not get to tell their side of the story. “I feel like I belong somewhere else,” admits Alex, a gangly twelve-year-old Iowan. Moving away is all Kelby, a sixteen-year-old lesbian in Oklahoma can do. She attempted suicide three times. Tyler, a seventeen-year-old Georgian, succeeded. So did Ty, an eleven-year-old Oklahoman. “Suicide is the ultimate consequence of bullying,” asserts Hirsch in his press notes. What can a kid do? Threatening her bullies on the bus with her mother’s handgun got Ja’Meya, a fourteen-year-old honor student in Mississippi, forty-five felony charges. Hirsch never faults parents for not raising their children to stand up and fight back, or fit in. Ty’s friend Trey admits he was a big bully back in second grade, but grew out of that. Later, when he was a victim, all he had to do was stand up to his bullies and that ended it. “If it was up to me, if I was the king of the United States, I’d make it to where there was no popularity, everyone was equal, because that’s how it should be,” fantasizes Ty. Tyler’s father, now an anti-bullying activist, invokes the military instead of monarchy: “And if we can continue to increase the numbers, whether it be one by one, two by two, eventually we have an army, to where we can defeat anything.” Video cameras, like the one that recorded Ja’Meya’s payback episode, seem to make the most difference. The Sioux City Journal reported that Hirsch’s video of onboard bullying resulted in increasing the installation of cameras and microphones to fifty of the fifty-five buses in Alex’s district. 94m. (Bill Stamets)