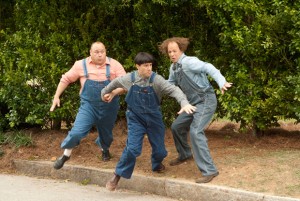 A vintage television trio of abusive dummies come to the big screen, thanks to the Brothers Farrelly, who made their 1994 debut with “Dumb & Dumber.” True to their source material, a Columbia Pictures series of shorts from 1934-1959, screenwriters Farrelly, Farrelly and Mike Cerrone set up “The Three Stooges: The Movie” as three sequential episodes with separate titles. Moe (Chris Diamantopoulos), Larry (Sean Hayes) and Curly (Will Sasso) are dumped on the doorstep of an orphanage. They stay on as the maintenance crew. When the orphanage faces closing, they venture into the outside world to raise $830,000 in thirty days, unaware their countless accidents over the past thirty-five years are to blame for an insurance crisis. In one funny bit, one of the few, the nuns give them $72 of “seed money” which they use to grow “free-range salmon.”Tipping their water cans to refresh their crop, they walk among flapping fish planted on a golf course. Stooge routines from the past are preserved with little variation, except for Moe adding armpits to his hair-pulling targets. The sound effects for the repertoire of Stooge-on-Stooge battery are louder and little else. Music cues of old include “Three Blind Mice” and “Turkey in the Straw.” I did not anticipate Bob Dylan’s “Just Like Tom Thumb’s Blues.” One contemporizing hook is casting Moe in a reality television show about inept idiots, with Mike ‘The Situation’ Sorrentino and Nicole ‘Snooki’ Polizzi. The Farrellys forsake their usual underlying middle-brow message. This physical comedy perpetrated by ids-off-the-leash is an insult to slapstick. Opening the same day as “Bully,” “The Three Stooges: The Movie” contains a public service announcement to show audience members as stupid as Stooges that the head-hitting hammer is made of rubber and is painted to look like it’s capable of denting skulls. With Jane Lynch, Sofía Vergara, Jennifer Hudson, Craig Bierko, Larry David. 92m. (Bill Stamets)
“The Three Stooges” am now playing.
Ray Pride