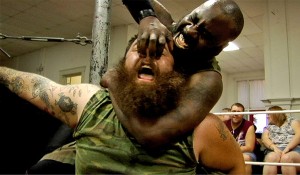 Robert Greene’s documentaries “Kati With An I” and “Fake It So Real” possess a vivid “presentness”: it’s a combination of observant cinematography and a keen editing sense honoring the tradition of cinema vérité. In the case of his latest, the terrific “Fake It So Real,” which he photographed along with Sean Price Williams, Greene makes vivid work of a single week in the lives of a ragged bunch of North Carolina independent wrestlers before a big Saturday night show. The gritty shooting style is an appropriate joy: seemingly casual but splendidly caught, the rehearsals and boasts and tale-telling and talk establish a straightforward slab of white working class Southern culture. A few steps up, they might well become ragtag. (Amusingly, “Fake It So Real” also evokes the backstage musical genre, with its cast of characters starting as individuals and then working toward the climactic Big Show.) Good-natured warnings from its sweet-hearted characters like, “He’s gawna light yore ass up” are simply poetry within the context, unapologetic yet hardly referential to the bodily mayhem on view. Present and accounted for. 94m. (Ray Pride)

“Fake It So Real” opens Friday at Facets. A trailer is below.