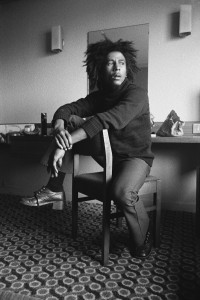 Kevin Macdonald (“Touching The Void,” “One Day In September”) directs an intimate, detailed portrait of Jamaican reggae legend Bob Marley (1945-1981). Made with his family’s cooperation, this polished documentary lists his musician son Ziggy Marley as an executive producer, along with Chris Blackwell, who signed Bob Marley to Island Records in 1971. Marley recorded “Judge Not” in 1962 at age sixteen. His early days included overnighting in a cemetery to overcome stagefright, and covering “Teenager in Love.” The account of his family life looks at his absent white father and his own distance from his offspring with different mates. Marley’s dealings with Kingston gangs, Rastafarians, prime minister candidates and African causes reveal a musician transcending the studio and stage. Apparently, though, he never figured out why African-Americans did not take his music in a spirit of racial solidarity. Macdonald ably researches the making of this international star, but hardly establishes him as a “revolutionary” and “a social and political prophet,” as his press notes hype. “Marley” works as a life story, cultural essay and a musical salute. 145m. (Bill Stamets)