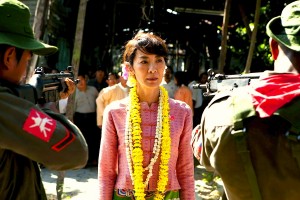 Luc Besson’s career as a director-producer has been supremely profitable yet eccentric as any in the world. While he began his career with stylized art-house action like “The Last Battle” and “Subway” and then juicy, visually shellacked pulp like “La Femme Nikita,” “Leon: The Professional,” and “The Fifth Element,” his greatest success has been as a producer, with his EuropaCorp studio making propulsive if ragtag thrillers like “Lock-out,” “Colombiana,” “Taken,” “Transporter” and “Taxi,” usually with a story credit for himself. As director, he’s dipped into the hybrid animation of the “Arthur and the Invisibles” series. Of the zigs and zags of his career, one of the oddest may be his drab, reverential treatment of the life of the Nobel Peace Prize-winning Burmese dissident Aung San Suu Kyi (Michelle Yeoh). What drew Besson to the goodness and perseverance of this woman? “The Lady” offers few clues on its own, although his own Milla Jovovich-starring “The Messenger: The Story of Joan of Arc” (1999) also attests to his attraction to powerful, bold heroines. While promoted during the 2011 awards season, the public release is timely, coming as the authoritarian Burmese government rapidly, unexpectedly opens the country to the larger world, and as Suu Kyi has for the first time in fourteen years been allowed to stand for election, and to take a seat in parliament. “Democracy takes time,” a character observes, time that may have been better spent on the splendid true-life Aung San Suu Kyi than this tepid, sometimes confusing hagiography. Yeoh provides flint and spark at the odd moment, but the screenplay doesn’t seem to know what the movie could, or should, be about. With David Thewlis. 127m. (Ray Pride)