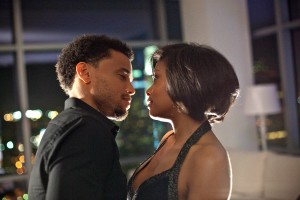 What’s the secret to making a good, contemporary, satisfying, successful commercial romantic comedy? Not even a classic, not even an “Annie Hall” or a “Some Like It Hot,” just one that embraces the here-and-now?

Just to be good. Talky, funny, headlong, “Think Like A Man” succeeds in its modern multi-couple roundelay by being brisk, breezy and sometimes shameless while feeling as modern as can be, and capturing its milieu in and near Culver City, California, as well as any urban-set story out this year. So what possible problem could it have reaching a wide, eager audience, the kind that makes hits of earnest movies from filmmakers like Nancy Meyers, about urbane, optimistic neurotics battling their worst impulses and eventually embracing their best?

Here’s the dilemma for a movie that “scored some of the highest marks ever recorded at audience research screenings,” according to New York magazine’s Claude Brodesser-Akner. This cheeky, good-natured, unexpectedly satisfying comedy from Screen Gems, the studio that aligned Justin Timberlake with Mila Kunis for last year’s equally jam-packed “Friends with Benefits,” an unnamed former studio marketing head observes, aligns with successful romantic comedies that range from “Tootsie” to “He’s Just Not That Into You.” But the core difficulty? The “Tyler Perry problem.” “Perry became the highest-paid artist in show business making films with almost entirely black casts that feed African-American stereotypes of black America while simultaneously dining out on them,” Brodesser-Akner writes, boiling down a 1,600-word analysis. “Thanks to Perry, the sight of a film with an all-black cast practically telegraphs to most white audiences: This isn’t for you.”

Yikes. That is a problem, at least until audiences get in the door and in the seats, that report concludes. Here’s the setup: Four women follow the advice of a ridiculous self-help book, a lovelorn how-to book penned by comedian, talk show and “Family Feud” host Steve Harvey. It’s a real book, published in 2009, and Harvey himself is one device used to speed things along, mocking the open-armed obviousness of his advice—why don’t you casually slip questions like “What are some of your long-term goals?” into conversation—while introducing the behavioral clichés the characters will have to alternately reject and embrace. (Plus, cold jokes about the flatness and badness of Tyler Perry movies.)

Producer William Packer’s earlier movies include “Stomp the Yard” and “Takers” (2010), a crime drama just as stuffed-to-the-brim with incident and characters, and his commercial instincts include hiring director Tim Story, whose earlier work includes “Barbershop” (2002), another ensemble story that races forward without hesitation.

“Think Like A Man” is a seriously good-looking movie, from its teeming cast—Gabrielle Union, Jerry Ferrara; Regina Hall, Terrence J; Romany Malco, Meagan Good; Kevin Hart; and Michael Ealy and Taraji P. Henson—to its night-and-day Los Angeles locations and its just-this-side-of-“thirtysomething”-twenty-five-years-on interiors. They engage a range of familiar types with ready chemistry, and Story and screenwriters Keith Merryman and David A. Newman (“Friends with Benefits”) marshal them with comic calculation. James Brown’s “It’s A Man’s Man’s Man’s World” plays under the credits, an ironic preamble, considering the movie’s ultimate weave of ensemble storytelling, which ultimately resembles the free-associating TV show “How I Met Your Mother” blown up to the big screen in its warmth and generosity toward its characters, male and female alike.

Products are shiny, too, from ubiquitous Sony flatscreens, phones and computers to Heineken and Amstel Light and SmartWater and Newcastle Brown Ale bottles; nights out in restaurants or at a Ritz-Carlton or Marriott, with glimpses of Barnes & Noble and Zagat guides and little red Moleskine notebooks. There are shameless verbal gags as well as pop culture and product-dissing jokes. “Think Like A Man” also has the audacity to alternate snappish banter about a strip club called “The Ass Factory”—”Let’s go, let’s go, I got a pocketful of ones and I ain’t wearin’ no drawers”—with scenes like Henson and Ealy’s very sexy appreciation of a fine wine to mutual swoons, an invocation of Sun Tzu’s philosophy of war, and a running gag about Plato’s allegory of the cave. (Its most elevated prior citation in a movie, cited as the origin of movies themselves, may be in Bernardo Bertolucci’s art-house exemplar, “The Conformist.”)

Less a mess than a generous buffet of likable character bits, the rat-race woman-vs.-man dog-dogging-dog construction falls away as the eyes of the characters light up with delight at each other. Plus, in lieu of “Friends with Benefits”‘ lamentable Times Square flash-mob dance number, “Think Like A Man” features the opening night of a food truck as a characters’ dream come true, a pleasingly down-to-earth location for its raft of characters to congregate in at least momentary bliss.