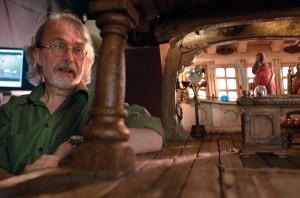 Beaming fifteen-inch figures stand at rubbery attention in front of a roaring fake fire in a cleared-out hotel bar. Peter Lord, director of “The Pirates! Band Of Misfits” and co-owner of Aardman films, is not impressed.

“It’s a rubbish fire,” he says, “Rubbish,” as we sit before the audience of the Pirate Captain, various cohorts and a squishy little Dodo, the most agreeable of the lot from “The Pirates! Band of Misfits,” the animated eighteenth-century-set seafaring send-up from Aardman. During the 3D stop-motion action, which was produced on actual scale sets, I wondered if there would be a squeezable bath toy based on this little fellow. Now I make the mistake of reaching for the Dodo, and neither of us can get it back on its extinct feet.

Aardman has several projects on the go at one time, but how long does a film like this take? “Five years, yeah, yeah, yes,” he says with shambling English comic rhythm. “Still, as a director you’re never allowed to think anything through. ‘We need a decision by 12:15, now the next meeting, now, we’ve got to choose now, if we don’t choose now, it’s three months time, choose, choose, choose.’ And trying to do everything at once and never having time to do anything properly. Absolutely exhausting!”

Like raising a child. You thought the terrible twos was bad? Here’s the terrible threes! “A bit like that, yeah,” he says, miming wiping his brow. “All I can tell you is it is bloody difficult to get films to line up properly! We have a physical studio, a studio floor, with lights and cameras and all that stuff and a team of artists and craftsmen. In an ideal world, I’d keep them employed steadily. But! It never bloody works out. A new movie will be moving into the studio soon, but right now we’re shooting a kids’ series, which is how we keep the studio warm and the craftspeople busy.” He thinks for a second. “It’s hard to do feature films, I can now report!”

How many different crews do you have capturing the Captain at one time? The process sounds mightily schizophrenic. “Twenty to thirty different people performing the same parts at the same time, you look through a curtain, he’s acting, you look through the next curtain, there’s the Pirate King, he’s acting again. A different animator, of course, is performing him in each unit. The great trick, the great scale of the thing is to make it feel like one performance, and not fragmented. Or schizophrenic!”

The Pirate King was in his own version of Charlie Kaufman’s “Synecdoche, New York.” His entire life exists of capturing his entire life.  “Rather, yes! There you go!”

The frames are, as in all Aardman enterprises, crammed with details, including an extendable shaving mirror on one side of the pirate frigate, and a London side lane I hope never to stumble upon, “Lonely Street E. C. 1.”  Lord laughs lavishly. “You know, we indulge ourselves a bit with that stuff. People love doing it, designers, model makers, storyboard artists, all have ideas and my fortunate job is to choose between them. ‘No! I never want to see that again! Go away!'”

Aardman’s best-known eccentrics, Wallace & Gromit, like a bit of cheese. The Pirates are on about “ham,” to recurring and comic effect. Why ham? “It’s hard to explain why that’s the case. I was surprised as anyone to discover that ham was so important to pirates, I didn’t know this before. They most like it honey-roasted, y’know. It was in the books. The books and the writer are always playing these clever tricks on the reader and in this case, the deviltry is to just sort of dive in there with the general assumption that ham is the greatest thing to pirates. There used to be a line, which is gone, sadly, I can’t remember why, but the captain said, ‘Come on now, boys, you know my motto, what’s my motto? I like ham!’ and his loyal left hand said, ‘And a very good one it is, too, Cap’n.'”

There are no sea shanties, which would run the risk of being instantly grating. But a couple of stirring interludes come from bursts of post-punk, with a journey across a map of the sea scored to the Clash’s “London Calling” and another to English Beat’s “Ranking Full Stop.” Out of nowhere, I found it weirdly affecting, just from the lyrics, not from any analogy between punk and pirates. “Good, good, me too,” Lord says. “We had, briefly, we also had on there the Sex Pistols’ ‘Frigging in the Rigging,’ which was incredibly effective! It was so effective! It was irresistible. But unfortunately, it’s utterly obscene. Wow, really obscene. Which was unfortunate. We laughed and laughed because it was so outrageous, but a bit too outrageous. We wouldn’t have gotten our PG rating with that in there!”

“The Pirates! Band of Misfits” opens Friday. A look at the sets for the movie’s stop-motion process is below.