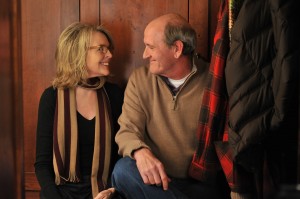 Once upon a time, in a galaxy far, far away…. There was a young screenwriter named Lawrence Kasdan. Co-writer on “Raiders of the Lost Ark” and “The Empire Strikes Back,” screenwriter of  “The Bodyguard,” his directorial career began under George Lucas’ wing with neo-noir “Body Heat” in 1981, and then he made “The Big Chill,” his 1983 remix of John Sayles’ “Return of the Secaucus Seven.” Some thought he spoke for the entire generation of Baby Boomers. Now Kasdan is sixty-three, and he hasn’t directed a movie since the lamentable 2003 Stephen King adaptation, “Dreamcatcher,” and his time away shows in the movie’s daring inconsequence. “Darling Companion” is a generational statement as well, more AARP than “Arf!”, for a post-middle-age demographic the movie industry could possibly profit from addressing, of citizens tending to senior whose attention tends to wander and who like going to the movies because it’s warm in there and dark and it’s okay if you fall asleep. “Darling Companion”: rated NP for “Nap.” Or, just call it “Big Pill.” After a wedding, several related couples stay behind in the mountains for a long weekend retreat. Along with them is “Freeway,” a rescue dog, who soon goes missing, revving the story up to second gear. The credit block promises much and the movie delivers little: Kevin Kline, Diane Keaton, Richard Jenkins, Dianne Wiest, Elisabeth Moss, Sam Shepard and Ayelet Zurer? Magnificence is promised, plus, Ayelet Zurer. The Israeli actress, playing the caretaker of the Kline-Keaton couple’s mountain manor, has a smile that cuts through the stodginess of the screenplay, even as she is called upon to play a consistently racist caricature of a Romany woman. “Gypsy?” another character helpfully asks, and later calls her sitcom visions, “Gypsy shit.” Still, there’s a scene where Zurer is called upon to feign surprise when she finds a tear under her eye with a fingertip, and she plays it, and plays it well. There’s a wonderful still from the film that shows Richard Jenkins and Diane Keaton having a laugh. I can’t place that scene for the life of me, and sorrowfully, it’s not indicative of the piddly plotting of “Darling Companion.” Man, though, if someone had written and made a movie that earned the skills of these two major, major, major talents. What are we offered instead?  We know that Kline’s doctor character has an ego as big as all Utah or as all Colorado or as all whatever western retreat these wealthy people go to, we know this because every other line is he or something else reminding us he’s a doctor and has a big ego or reminding us that he will be reminding us that he’s a doctor which shows he has a big ego and could probably afford someone to write more and varied and better dialog for him than the Kasdans have from the edge of their settee. “That’s my job, I’m a surgeon, but I’m no genius” is one of his earliest lines, expecting unctuous praise, and typical of the neatly carpentered yet lazy screenplay. Even stranger is the absence of the rescue dog from virtually the entire film: we’re left with hapless adults unable to find a microchipped dog in the woody, distinctly indistinct rich-person’s retreat. The largely unmemorable cinematography is by Michael McDonough (“Winter’s Bone”), with intermittent vistas accessible only by private road.  May each screening have a middle-aged howler in its midst like the one I attended, where each telegraphed banality was greeted with monkey-like mirth. 103m. (Ray Pride)

“Darling Companion” opens Friday at Landmark Century, Evanston CineArts and Renaissance Place. A trailer is below.