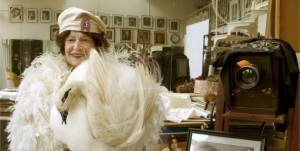 A survey of the last of the elderly whippersnappers left living in the 160 studios atop New York’s Carnegie Hall before the Carnegie Hall Corporation began evictions in 2007 toward renovation to office space, Josef Birdman Astor’s “Lost Bohemia” (2010) is bittersweet diversion. A twenty-year tenant himself, Astor recorded several hundred hours of his neighbors across an eight-year span, and their cultural memories evoke times already lost, as well as the rarefied air of prior tenants, including Norman Mailer, Isadora Duncan, Marlon Brando, Enrico Caruso, Charles Gwathmey, Andrew Bergman and Bill Cunningham (whose digs are seen in the more dynamic documentary, “Bill Cunningham New York”). Andrew Carnegie had established the artist’s aerie in 1894, but it is no more. There is love and earnest hopefulness in these vanquished memories. Isaac Stern, former artistic director of the space, had noble words: “Carnegie Hall is a crucible of democratic creativity, bringing together all that is best in America’s myriad ethnic and cultural strains, proving that we have built not just a nation but a civilization.” Whoops. With Jeanne Beauvais, Robert X. Modica, Editta Sherman, Dr. Donald Shirley, John Turturro. (“Lost Bohemia” was partially financed through Kickstarter.) HDCAM video. 77m. (Ray Pride)

“Lost Bohemia” plays Siskel Friday-Saturday and Tuesday-Wednesday. A trailer is below.