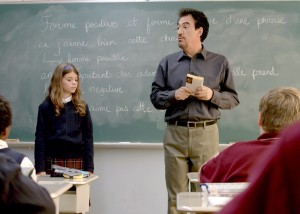 Acute, perceptive, compelling, “Monsieur Lazhar” is a rich portrait of a man finding his calling under unlikely circumstances. Canada’s nominee for this year’s Best Foreign Language Film Oscar, adapted by Philippe Falardeau from Évelyne de la Chenelière’s one-act stage monologue, keeps its focus on its singular character, Bachir Lazhar (Fellag), an Algerian immigrant who applies for a job just at the moment a grade-school class desperately needs a replacement instructor after the trauma of their teacher’s suicide after hours in the classroom. Why is he in Montreal? What about him will make him not only the ideal substitute teacher for this troubled, troubling moment in the lives of the kids in the classroom, but also the kind of teacher who will be remembered, gratefully, by all of them? Classroom dramas often traffic in false uplift and simple sentiment. “Monsieur Lazhar” is deceptively understated, gratifyingly subtle, and rich with details for an eager viewer’s discovery, from the rich performances of the child actors, to the freighted but not fraught, weighted but far-from-heavy performance by the wondrous Fellag (until this film, most known as a premier satirist forced to leave his native Algeria). The delicate dance of drama between the characters is often sublime. With Sophie Nélisse, Émilien Néron, Danielle Proulx, Brigitte Poupart. 94m. (Ray Pride)

“Monsieur Lazhar” opens Friday at the Music Box. The trailer is below.