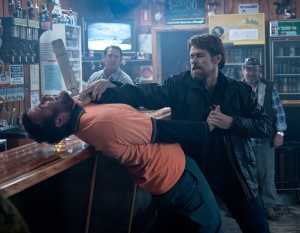 “The Hunter” shares pedigree with a new generation of Australian filmmaking, including co-producers behind the impressive gangster film “Animal Kingdom” (2010), and a novel for source material by Julia Leigh, who made her directorial debut with the controversial sexual allegory “Sleeping Beauty” (2011). Willem Dafoe plays a mercenary, dispatched by a Euro-biotech conglomerate to the Tasmanian wilderness to search for an animal supposedly extinct since the 1930s, the Tasmanian tiger. Can a cold, closed-off man dropped into teeming countryside of forest and fog, in search of something so rare, find what’s long dormant in himself? Blah-blah-blah, yes, but director Daniel Nettheim, an experienced director of Australian television drama, contrasts epic with intimate in chilly measure and keeps the eco-allegory to a light chill. Dafoe remains charismatic, even on low (or no) boil. The poetic steeliness that seems intended is visually impressive, even if it never attains the measured rhythms of other latter-day morality neo-Western, neo-noirs like Anton Corbijn’s “The American.” The impressive cinematography is by the talented Robert Humphreys (“Somersault”). With Frances O’Connor, Sam Neill, Morgana Davies, Finn Woodlock. 101m. Widescreen. (Ray Pride)

“The Hunter” opens Friday at Landmark Century. An Australian trailer is below.