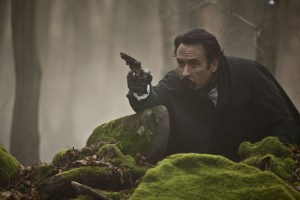 John Cusack was cast as a writer in “Shanghai,” “2012,” “1408,” “Martian Child” and “Midnight in the Garden of Good and Evil,” and now, in “The Raven,” he plays Edgar Allan Poe. That 1845 poem earned its author nine dollars, one striking historical detail in the screenplay by Ben Livingston and Hannah Shakespeare that draws on nine Poe stories. Their 1849 “Serial Killer” headline, though, is some eleven or twelve decades too soon. “John has Poe’s passion, his intellectualism and thoughtfulness,” testifies Shakespeare in the press notes. Other traits are added for the sake of a by-the-book thriller about a killer who stages grisly scenes inspired by Poe’s gothic works. Inscribed with clues, the corpses fit into a literary puzzle leading to Poe’s beloved Emily (Alice Eve), kidnapped at a masked ball by a psycho-fan on her birthday. “I feel like I’ve gone from author to character in one of my own tales,” muses Poe, as he decodes a ludicrous chain of allusions with Detective Emmett Fields (Luke Evans). “The Raven” is less keen to plumb the eccentric psyche of the man of letters who dissects a human heart with his pet raccoon, tosses such epithets as “mental oyster,” and rues the “morbid melancholy that has followed me like a black dog all my life.” Longtime collaborator of the Wachowski siblings, director James McTeigue (“V for Vendetta,” “Ninja Assassin”) shoots his period Baltimore in Budapest and Belgrade. What is advertised as “an audacious reimagining” fails in fact to imagine any visual mannerisms to fit Poe’s verse or perversity. The score railroads plot turns with blunt punctuality. Early in the investigation, Poe is a suspect. “Is imagination now a felony?” he grandstands in handcuffs. “The Raven” hardly risks a ticket for an infraction, let alone a misdemeanor. With Brendan Gleeson, Oliver Jackson-Cohen, Kevin McNally, Sam Hazeldine. 103m. (Bill Stamets)
“The Raven” opens Friday.
Ray Pride