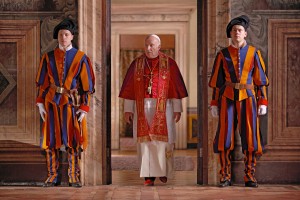 (Habemus Papam) Nanni Moretti wears many hats—actor, writer, director, film distributor, owner of Rome’s leading art-house cinema—and his movies range from comedies about modern life to melodramas about loss (the heart-shaking “The Son’s Room”). Occasionally, he makes a not-very-good movie, and even when distribution of foreign-language films wasn’t so uncommon, they would fail to find American exposure. (1993’s semi-autobiographical, Woody Allenesque satire “Dear Diary” made it here.) Old men in Cardinals’ raiment are about the limit to the spectacle in Nanni Moretti’s quizzically underfed “We Have A Pope,” which may have been hoped to be a comedy. Eighty-six-year-old Michel Piccoli plays a reluctant, newly elected Pope who, nearing the end of a long life, has an anxiety attack accompanied by doubts about his calling, so he runs away. (Piccoli is game, but there’s little for him to do.) Moretti plays a psychiatrist whose ministrations may have encouraged his attempt to join with the common man; after the new Pope’s departure, he distracts the remaining ranks of holy men with volleyball. With music by Arvo Part. 105m. (Ray Pride)

“We Have A Pope” opens Friday at Landmark Century.  A trailer is below.