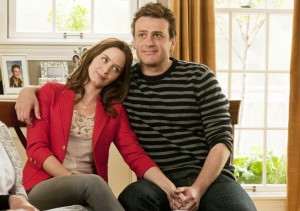 Freshly credentialed with a doctorate in social psychology, Violet (Emily Blunt, “Salmon Fishing in the Yemen”) checks the mail for a post-doc appointment at Berkeley. Her fiancé Tom (Jason Segel, “The Muppets”) is a sous chef in line for a promotion. This San Francisco couple must break up and then re-bond, as in every other romantic comedy in the history of the known cosmos. But first they must endure their respective montages with temp mates, who are the usual mismatches in age or libido or both. From director Nicholas Stoller (“Forgetting Sarah Marshall”), where writer Segel played a boyfriend in a break-up from a five-year relationship, “The Five-Year Engagement” engages with unusual wit, detail and tone. It is quieter than its manic kin made for date night. Music is a modest presence. Stoller and Segel let the characters work without pushing buttons on the soundtrack. Vinyl-era cues are five Van Morrison covers and three of his songs that this Bay Area bard recorded. The only biological clock here ticks off Violet’s deceasing grandparents, not her aging ova. It can be dispiriting to list all the fixtures in an American wedding comedy. Surprising is how original they are this time. (Even the obligatory masturbation jokes that come with Judd Apatow on board as producer.) And then there’s the unpronounceable Welsh name, Michigan deerhunters, Middle East tempers, nature documentary on sex-changer frogs, frisky foul-mouthed parents, rotating Asian girlfriends of a sixtysomething divorcee, cad of a prof making moves on a younger colleague, and the uncouth supporting characters who shag at a rehearsal dinner. With Rhys Ifans, Chris Pratt, Alison Brie, Mimi Kennedy, David Paymer, Jacki Weaver, Jim Piddock, Eric Scott Cooper, Mindy Kaling, Randall Park, Kevin Hart. 124m. (Bill Stamets)
“The Five-Year Engagement” opens today.
Ray Pride