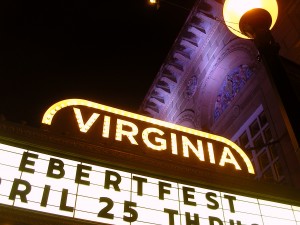 All the movies here are about forgiveness and mortality, I message a friend in the midst of last week’s fourteenth edition of Ebertfest in Champaign-Urbana.

The quick, glib text in turn: “Isn’t that all movies, really?” Since I didn’t know I was going until a couple days ahead, I hadn’t looked over the list of twelve “overlooked” features that Roger Ebert and his festival staff had programmed. All I really knew was that no movies or presentations overlap, and ample time is slotted for lunch and dinner; that is, lots of gab.

On opening night, “Joe Vs. The Volcano” (1990), shown at the sold-out downtown 1,525-seat Virginia Theatre (built 1921), is about a white-collar worker who escapes “Brazil”-like drudgery when he’s told he has six months to live. John Patrick Shanley’s cracked romanticism ensues. Mortality of another stripe came to light afterwards, when cinematographer Stephen Goldblatt said a DCP digital copy of the film had been mastered especially for Ebert, and he thought it looked finer than it had ever looked in its photochemical form. Still, the sixty-seven-year-old cinematographer admitted, he’s yet to shoot a movie in any digital format.

Further melancholy about the future of moviegoing came in small blue slips of paper fluttering around the festival, from the much smaller Art Theater (built 1913) around the corner. “The first time I went there,” Ebert has said, “it was to see ‘Citizen Kane’—that would have been 1956, I think—and then I went back again and again, all through high school and college, to see the new films from Italy, France, Sweden and Britain.” The 1913 theater has to go co-op and buy “costly new digital projection equipment,” the flyer related, “The Art Theater must meet its [$100,000] goal by October or it will close.”

An intense feeling of family is a large part of the attraction, regular attendees related all the way from Wednesday’s opening events until the Sunday closing. Whether far-flung friends of Ebert’s, or distributors, journalists and academics who attend regularly, like Sony Pictures Classics’ co-president Michael Barker, who presented “Higher Ground,” “A Separation” and “Take Shelter,” or Movie City News’ industry kibitzer David Poland, or retired University of Wisconsin film studies professor David Bordwell, who conversationally spins pertinent bits of past and future in the twinkle of an eye. (“Take Shelter,” notably, was the only film at this year’s event shown in 35mm on the fifty-foot screen of the movie palace, which is itself about to shut down for a year’s further restoration.)

The documentary “Paul Cox: On Borrowed Time” made its U. S. debut. (On Borrowed Time: the 35mm image.)  Coincidentally seated behind and a couple of seats over from Cox, the director of almost forty features, I couldn’t help but look from the screen at the most unvarnished moments (and the amplitude of naked women in clips from his corpus) toward him, and see whether he was amused or not watching his maverick behavior. (He seemed to alternate between stoically raised chin and quiet mirth.) In the documentary, the Dutch-born, Australian-made Cox bests his danger-defying peer and pal Werner Herzog in spectacular fashion, allowed the filmmaker’s cameras to follow him into surgery for a liver transplant at the age of seventy.

But the event that promised to be most resonant in this moment of the handover from celluloid to digital was Sunday noon’s closing attraction, a projection of the Blu-Ray of “Citizen Kane,” with Ebert’s time-honed commentary track playing. (He’d presented the film to audiences for many years, doing shot-by-shot analysis.) Ebert’s wife, Chaz, said it was an opportunity to hear his voice in the expanses of the theater one more time, since he hasn’t spoken since his surgeries of 2006. When Ebert makes a brief introduction with the help of the generic voice program on his MacBook, the crowd cheers and stands. Ebert scowls, gestures, sit down, siddown already!

The heavy red velvet curtains part, “An RKO Radio Picture” appears—a radio tower girdling the globe and transmitting worldwide—with the words: “This is Roger Ebert, watching ‘Citizen Kane’ with you.” Okay, I tear up. The surge of Orson Welles’ images take over immediately, as does Ebert’s two-hour nonstop weave of history and observations. The last words spoken are, “I’m Roger Ebert. I hope you’ve enjoyed seeing ‘Citizen Kane.'” The curtains close, the lights rise. Chaz moves center stage, in front of the red velvet waves and folds. She weeps. “It’s actually the first time I ever saw it,” Chaz says through tears. “After all these years, I’m glad I saw it on this big screen with Roger back there—and have his voice—in the Virginia Theatre—” She sobs, can’t go on, the audience applauds. “I’ve seen ‘Citizen Kane’ many, many times but we’re always so busy, I didn’t have time to stop and listen to the commentary track!”

Festival director Nate Kohn appears on stage with a scrap of paper, from the Big Chair at the very back of the hall. “I have a note from Roger he wants me to read,” Kohn says. “He sends his apologies to the lady in the lobby who was loudly demanding her money back because he kept talking during the movie.” The audience laughs. Roger, heard once more; still.

Video of all Ebertfest 2012 panels and question-and-answer sessions are online.