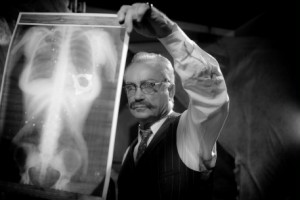 The first question that comes from watching most Guy Maddin films, “What on earth?” should actually be, “Where on earth?” The usual answer is Winnipeg; the correct one is “in this man’s mind.” “Keyhole,” (2011) his tenth feature, also takes place in a haunted house, and in a cracked black-and-white simulacrum of a 1930s gangster feature. Maddin, like few others, understands that the criminally under-used Jason Patric was meant to be a noir leading man. “I’m only a ghost, but a ghost isn’t nothing” and “It’s a leaky night!” are typical of the dialogue, redolent of Maddin’s fixations but also of his current collaborator, poet John Ashbery, who has penned a hundred shorts about movies that were never made or finished that Maddin is currently shooting in public in galleries around the world. I’m only a Canadian auteur, but a Canadian auteur isn’t nothing, eh? Maddin casts his loosey-goosey peregrination around “Ulysses”—Joyce, meet Homer; Homer, meet Joyce—across terrain much like in his psycho-autobiography, “My Winnipeg” and its “cinematic rehab,” as the filmmaker has dubbed it. “‘Keyhole’ is a domestic Odyssey across carpets and floor tiles instead of across the sea,” Maddin explains in one of his typically amusing documents. “Here, in the old family home, the film can poetically study the emotionally complex importance of the house, everyone’s house, and all the memories that haunt every nook and cranny of our childhood domiciles. The film is as much an autobiography of a house as anything else.” The images are dank and rich with digital details, edging away from the semi-celluloid shadow and scrim and smear of earlier films; any weave of story is largely unrealized. “So many locked doors and they all have to be opened!” goes an exclamation: where they go…? Nudity and sexual imagery are in evidence, and the house is peopled by familiar faces from the Maddin gallery, including Isabella Rossellini and Udo Kier as well as Kevin Macdonald, Brooke Palsson and David Wontner. Commissioned by the Wexner Center for the Arts at Ohio State University, and co-written by Maddin’s customary co-scribe, George Toles. 93m. (Ray Pride)