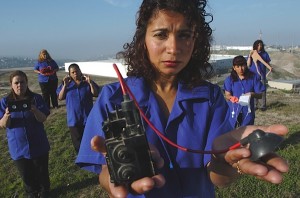 One of two films on globalization presented in advance of the NATO summit shutdown of Chicago, Vicky Funari and Sergio de la Torre’s “Maquilapolis (City of Factories)” profiles women who work at a Tijuana factory run by a multinational, or a maquiladora, who fight for severance pay after their employers take flight, leaving behind lost jobs and toxic waste.The determination of the women is admirable, especially in a struggle against faceless corporations that owe their existence in far too many cases to social injustice. The realities behind immigration and economic issue emerge in stark relief. 68m. (Ray Pride)