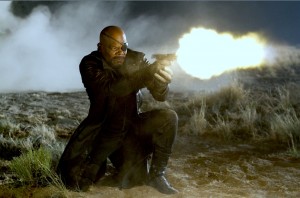 If you count the five prior movies that feed into the “mythologies” of “Marvel’s The Avengers,” it must be the most expensive, if not the most accomplished, feature film of all time. (At least until James Cameron surfaces a couple more “Avatar”s in the next decade.) To take ten or eleven hours to build up to writer-director Joss Whedon’s new movie follows the pattern of quality television series since the past decade or so, that the two-to-two-and-a-half-hour theatrical feature format can’t fit all the chewy goodness of the amazing and beautiful and literary and emotional imagination at hand. That, of course, refers to “Breaking Bad,” “The Wire,” “Mad Men” and “The Sopranos” and should not in any way be attached to “Marvel’s The Avengers,” which is more like a plastic pumpkin at the front door filled with bite-sized, slightly mooshed and maybe a little melted candies that children would never eat unless there were a big plastic pumpkin filled with them at the front door. It will make a mint—it will buy the mint, tear the mint down, and fill it up all over again—which will help pay down Disney’s $4 billion-plus acquisition of Marvel, but which will only encourage them to make more meshuggah mayhem with an ever-attenuated attention span. Naively, I chose to believe the torrent of early roars raised for this movie, that Whedon, co-writer of the snappy “Cabin in the Woods,” released a couple of weeks ago, had pulled off something as formidable, for the eeeeentire family, come one, come all, of all ages, even approaching all his seasons of “Buffy”-buffing. To my attention, span, eh. When, among fireballs and cars pinwheeling end-to-end, the mind snaps to attention only by cameos from Polish film director Jerzy Skolimowski, Stan Lee and one lovely, now-wispy eighty-five-year-old American acting icon, and by a consistent regard for the backsides of its actresses, there’s just too much of a so-so thing. Gwyneth Paltrow’s first scene is in either cut-off or pasted-on Daisy Dukes, barefoot and bare legs up to there; Scarlett Johansson’s black-leatherette suit is repeatedly framed and lit to show her pear-shaped bottom to advantage; and, as Nick Fury’s aide-de-camp, or girl Friday, or eye candy, or something, the ever-likeable Cobie Smulders provides one of the film’s final images, yes, of her leather-pantsed behind striding away from camera. Joss Whedon is an ass man, not to be confused with an ass, man. He’s smart. PLUS, Hulk SMASH. Bless Mark Ruffalo. Bless SMASH JOKES. Plus Robert Downey, Jr.? His character, as Downey’s features contract with middle age, no longer seems merely self-involved, but mean on a good day, and cruel on most of the others. If you’re a devotee of the decades and decades and bales and bales of Marvel backstory of “The Avengers,” this could be memorable, mesmerizing, propulsive, compulsive, orgasmic stuff, yours for the inferring. Outsiders will largely remain in the dark. Also with Chris Hemsworth, Chris Evans, Jeremy Renner, Tom Hiddleston, Clark Gregg, Stellan Skarsgård. 142m. (Ray Pride)

“Marvel’s The Avengers” opens Friday, largely in 3D, which Nick Fury could never, ever appreciate. Joss Whedon explains a major fight scene below.