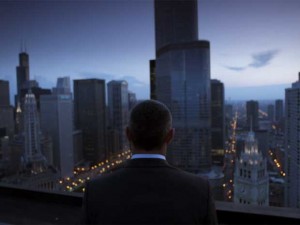 Mathieu Roy and Harold Crooks’ globe-girdling Canadian documentary, based on Ronald Wright’s bestseller “A Short History of Progress,” asks, is the earth at the end of “a failed experiment”? Galvanic and bristling, it sleekly surveys factors threatening life itself on earth, including, but not limited to, centuries of industrial development, elevated levels of consumption, overpopulation, largely unstemmed pollution and global warming.  Shooting in New York, Montreal, Toronto, Winnipeg, Shanghai, Beijing, Brasilia, Sao Paolo, DC and Dubai, “Surviving Progress” arrays smart people to offer a startling array of pessimistic analyses. Wright, who warns of “progress traps” that actually accelerate problems than solve them, especially the notion of progress for its own sake, is among those interviewed, as well as primatologist Jane Goodall, author-activist Margaret Atwood, Stephen Hawking, genomic biologist Craig Venter, Brazilian politician Marina Silva and economist Michael Hudson on camera. Hawking says, “We are entering an increasingly dangerous period of our history.” Still, he would be the one to add, ” But I’m an optimist.” The filmmaking acumen ranges from a clever analogue to the tossed bone match-cut to a spaceship at the beginning of “2001: A Space Odyssey,” to a montage of interviewees unable to define the word “progress,” to information arrays that remain lucid even when dense. Once it’s rushed to its conclusion, “Surviving Progress” makes you want to step outside, take a breath, think about… shit. It’s all so Koyaanis-whatthefuck-si. For all its complexity and all the information on display, it mostly makes you want to get indoors, curled up, hoping not to think. Descriptive, not prescriptive: we knew things were bad, with the potential for either worse or much worse, okay, but how can we make conditions good? Better? How? One documentary shall beget another. Co-executive produced by Martin Scorsese. 86m. (Ray Pride)