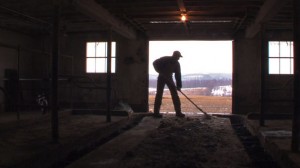 “Boardwalk Empire” producer Rudd Simmons, who’s also worked on Jim Jarmusch and Wes Anderson films, is an eagle-eye-on-the-wall in his self-financed “The First Season,” as he follows the fortunes of New Yorkers Paul and Phyllis Van Amburgh across five years after they’ve moved upstate to live the lives of dairy farmers, raising three children with another on the way while reviving a defunct dairy farm. Romantic? Back-to-the-earth? More like a fresh grindstone, however appealingly stark the surroundings. “You have to be an— optimist to get into this game” is the opening understatement. “It’s too hard.” Ardor begets ordeal in an engrossing, sympathetic, unsentimental narrative. Simmons and Matthew O’Neill’s clear-eyed cinematography is a big plus. Premiered at Slamdance 2012. 83m. (Ray Pride)