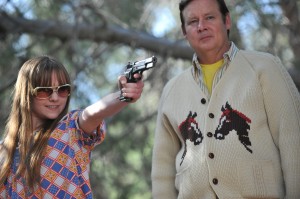 Even with an early image of forbidden splatter that would never make it into even a conversation about an idea of the possibility of a studio-made picture, there’s a strange calm to Bobcat Goldthwait’s fierce black comedy “God Bless America.” It’s surely the year’s only movie that evokes the highway of Capra’s “It Happened One Night,” the fulminations of “Network” and the fumes of Gaspar Noé’s “I Stand Alone.”

As Frank, an everyman figure in Syracuse, New York, thrown to the wind, Joel Murray is supremely calm. And when he speaks? He’s just a guy making sense. His life and work are falling down around him, he’s getting headaches, he’s worried about whether he may be terminally ill and everything he sees on television seems like a terrible hallucination of a world, and country, gone wrong. It’s mild compared to your everyday online comment section, but it’s rarely portrayed in contemporary movie comedies. After getting fired, Frank buys a gun and sets out to stalk celebrities, and quickly enough, an equally pissed-off teenager (Tara Lynne Barr) attaches herself to his crusade. (“Did you just kill Chloe? Awesome.”)

Early on, trying to talk to his fellow cubicle jockey at Mutual of Onondaga, Frank is the anti-Rush Limbaugh, speaking of the world in the most thoughtful way, while his co-worker counters in fluent rationalization. It’s funny, but it’s maddening: it’s satire, but… it’s not. “It’s extreeeem,” as one of the TV voices says, but it’s practically transcribed from daily public discourse. How about a terrorizing stalker-gossip news channel called “TMI”? Still, as in his earlier movies like “Sleeping Dogs Lie” and “World’s Greatest Dad,” Goldthwait’s fluid verbal rhythms elevate even the most swear-filled lines: “And frankly, Frank, I don’t fucking care.”

“There’s a saying, ‘Do one for yourself,’ but I do these whole movies for myself,” Goldthwait tells me before a standup gig in Peoria, a career that gives him the latitude to also make his modestly-budgeted movies. “Look, my movies, whatever they are,” he says modestly, “I don’t know what I’m doing, but— ”

My first note was “Wow. This is a motherfucking screed.” He laughs his generous, genuine laugh. He pauses. “But I do think, fortunately, my wife has a lot to do with this, the movies are really cast well. There are some screenplays that I wrote that would take attaching known names to it, because the budgets are just bigger, and it’s very frustrating. I want to go, ‘Just watch the movies, and if you don’t like them, [still], I don’t embarrass the actors. They tend to come off okay. First and foremost the thing is always the performances, it’s more important than anything in a movie. I want to make people feel safe and that they’re part of the project.”

The angrier Frank gets, the more disappointed he becomes, Joel Murray still looks so blissfully sane. Frank’s just a righteous man. “Yeah. Yeah. The other quality about Joel, and I’ve known him since I was in my early twenties, I think we’re the same age, is, he always was a fifty-year-old guy. I’m not saying this movie is going to do anything for anyone, but it would be nice if Joel started getting Bill Macy kind of work.”

So “God Bless America” is a hometown production? “Yes. We went back to Syracuse and shot. I went home and I’m sure they’re going to kill me when they see it! First, ‘There’s Clinton Square, yay!’ Then they’re going to go… ‘Oh. No.'”

So the firm of Mutual of Onondaga is a local joke? “Yeah, it’s the county. It’s a joke for 35,000 people. But there’s a lot of that in the movie, that only my brother, who’s my A.D. [assistant director], will get, that we laugh at.”

“God Bless America” is hardly satire, it’s almost stream-of-consciousness transcribed from the daily firehose of media nonsense. “All the stuff in the movie that’s like Bill O’Reilly or Glenn Beck, I’m just paraphrasing the actual thing. I’m not mocking them, even. Glenn Beck used to have his Hitler-Obama stuff and one of the guys working on the movie was from Germany and he got really upset by that. He said, you can’t do that. And I went, it’s based on a real thing! These targets aren’t like something I sat around and looked for. These things are there. That’s how I became aware of Glenn Beck. I was flipping the channel, very much like in the movie, and I came upon that image. I was like, what the fuck, who is this guy? I think we’re just becoming, I mean, it’s redundant for me to say it, you’ve seen the movie, we’re just such a nasty culture.”

Goldthwait looks out at the gray spring sky. “He doesn’t have any solutions. To me, the subtext is that by the end, Frank, he has all these rules that he wants people to live by, and when he finds himself attracted to this young girl, he’s just as flawed as the people he’s been shooting for the rest of the movie. I do believe that we’re all guilty. I’m not above… I was going to say, I’m not above watching reality shows, but I actually did, a few years ago around the time I wrote this. Then, I’m out. Somebody said some of the references are dated, and I said, I don’t keep up anymore. I just don’t! I’ll occasionally watch ‘RuPaul’s Drag Race,’ I’m not above stopping on that.”