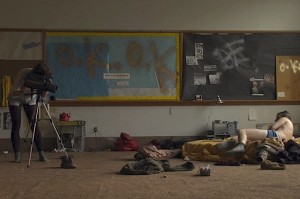 There’s a terrible truism that novels have always been betrayed by feature film adaptation, that the ideal source material is a short story, something that requires thematic amplification rather than narrative compression. Much of the wealth of recent microbudget American movies that’s meandering through festivals and cinematheques works best with deadpan and apparent minimalism. One masterful example would be Alex Ross Perry’s “The Color Wheel,” seemingly shambling but in fact arching toward a single powerful revelation. David Lowery’s kids-on-the-run “St. Nick” and his bedtime story short “Pioneer” also rush with powerful undercurrents. And Chicago’s own Frank V. Ross (the Desplechin-in-the-rough “Audrey the Trainwreck”) is moving toward something eccentric and mysterious. Simple as an anecdote, as transparent as a single bad idea, throw notions up in the air, as if story has become a succession of straightforward sentences rather than an intricate weave of experience and observation, transformed. “Bad Fever,” writer-director Dustin Guy Defa’s self-identified “feature film about self-expression” (edited by David Lowery) features Kentucker Audley, himself a practitioner of low-fi, no-budget filmmaking, as Eddie, a Salt Lake City loner who has unlikely dreams of becoming a stand-up comedian. If Eddie’s ever run across “funny,” funny never bothered to tell him its name. He’s awful. Less Rupert Pupkin than a lost soul bent on self-mortification, Eddie links up with a mean-spirited drifter (Eléonore Hendricks) who feeds directly into his masochistic wallows. He’s a modern man without even a shred of ambition in his humiliations, the stuff not of noir, but of the man a few seats away at the dark, damp bar, the one you edge, edge, edge, quietly away from without making any sudden moves that might regain his fluttery notice. Audley and Defa have done something marvelous, but it’s way on the other side of bleak. (There are happy instants.) It’s not a horror movie, it’s a terror movie, and you keep telling yourself, when I wake up, this will all be a movie, one based not on a novel, not on a story, but pure, distilled night sweats wrung from the dingiest sheets. 77m. HDCAM. (Ray Pride)