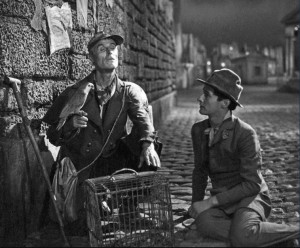 The proscenium frames life; behind the curtain, another life? More life. In an introduction to the 2002 Criterion edition of “Children of Paradise” (Les enfants du paradis), Terry Gilliam swoons in his rocketing enthusiasm that Marcel Carné’s lavish epic is “one of those films that seemed to me that we’ll never see again, because there was a time when poetry and big budgets seemed to go hand-in-hand, we don’t allow that anymore.” You can see parallels between Carne’s masterpiece and Gilliam’s later work, but his championing of the film is nonpareil: “It’s everything I dreamed about movies. It’s a world that didn’t exist, this density of people, this extraordinary world, these extraordinary buildings, extraordinary events, it’s a circus! It’s magic! It’s all there.” Oui. Depicting Paris under Louis Philippe in the 1840s along the Boulevard du Crime, produced in the 1940s under the Occupation, “Children of Paradise” teems with melodramatic goodness, timeless drama, intriguing details that come to life on the largest possible screen. It’s the kind of film that cries out neither for yet another plot synopsis nor a monograph or treatise, it simply calls out a friend to introduce another friend to a lasting treasure. Pass it along. In the Cannes 2011 press kit, preservationist Christian Lurin points out a dilemma of current “film” preservation: “The big problem with digital files, is that they can’t be left without follow-up. The incertitude lies there. It means for fifty or a hundred years somebody must always be there to keep trace of the digital file to be sure of its preservation. We know very well that film cans can be abandoned for 100 years in an attic and then be found again. Work will be needed to be done on them but they are not lost…. One sure thing is that the restored version will be transferred onto a 35mm negative print, if only for reasons of preservation. Ironically, putting it back on film—on the polyester we have nowadays, which is extremely resistant, unlike nitrate or triacetate—is the only way to guarantee that all this work won’t be lost within 20 years. [T]his restored negative will be… put in cold storage at 4°C and its conservation will be assured for at least five centuries.” All that fuss just to make sure beauty and poetry survive. Written by Jacques Prévert. With Arletty, Pierre Brasseur,  Jean-Louis Barrault, Marcel Herrand, Maria Casares, Louis Salou. 190m. This version was restored in 2011 and is digitally projected. (Ray Pride)

“Children of Paradise” opens Friday at the Music Box. The splendid seventy-page press kit that describes the restoration process, hosted by the Cannes Film Festival, can be downloaded here (PDF).