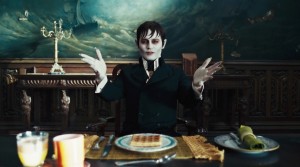 “Dark Shadows” is a weirdly tender mash note to the pop culture of 1972, the year after the vampiric soap opera ended its five-year run, but also when the young Tim Burton would have been all of fourteen years old. It’s great fun, when things aren’t exploding, burning or bursting into flame. While the illustrator-director’s dreams of dead things are often taken as his most personal expression—partly because of how many dead things there are in his work—”Dark Shadows” feels somehow joyful, somehow more “personal” than most of his movies. It feels… felt. And while the comedy is erratic, it’s often sweetly measured and timed. More than once, I thought of the immortal line Roger Ebert penned for “Beyond the Valley of the Dolls” (1970), when a character exults at a party: “It’s my happening—and it freaks me out!” Co-producer Johnny Depp plays seventeenth-century vampire Barnabas Collins, alternately courtly and cruel, dug up in a scene echoing one in “Deliverance” and delivered to the now-shabby Maine manse of his fishing-fed family. The matriarch is played by Michelle Pfeiffer, who spends much of her time glowering down from a staircase at her ten-year-old nephew, thought crazy because of his fixation on his late mother, a drunk doctor played by Helena Bonham-Carter, and her own daughter, Carolyn (Chloë Grace Moretz). Moretz is the wild card, a murmuring fifteen-year-old who appears perpetually stoned and dances around in t-shirt dresses baring her legs: this is the pre-Goth girl a young Burton might well have fixated on in his Burbank boyhood. His adult women tend to big hair and bigger hair, as well as hair and makeup making them resemble the actress Lisa Marie, including Barnabas’ many-lives-long adversary in business and in love, Angelique Bouchard (Eva Green) and Bella Heathcote, playing both the children’s nanny and an apparition of Barnabas’ one great love. (The house staff of two, including a drunken janitor played by Jackie Earle Haley and a mute elderly woman, suggest a “Fawlty Towers” version of Collinwood that never gets fully inked in.) Cinematographer Bruno Delbonnel (“Amélie “) is an apt choice for a likably lysergic color palette caricaturing the early 1970s, as well as timeless hues of ruby and red. Written by John August and Seth Grahame-Smith (aka Seth Jared Greenberg, author of “Pride and Prejudice and Zombies” and “Abraham Lincoln, Vampire Hunter.”) In a party scene, Alice Cooper performs several numbers, looking just hale enough to be cast as Harry Dean Stanton’s father. With Ray Shirley, Christopher Lee, Jonny Lee Miller, Gulliver McGrath. 113m. (Ray Pride)