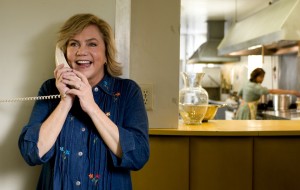 Serial Mom seeks sooth. Kathleen Turner is a dynamo lighting up Anne Renton’s “The Perfect Family,” a Catholic-oriented “let’s-put-on-a-show!”-scaled comedy of modest range. As a suburban mother who covets the local Catholic Woman of the Year plaque, Turner gives the material her all, even when the material is maddeningly shallow or internally contradictory. Conflict ensues with her “nonconformist” family, including a lesbian daughter (Emily Deschanel) and a philandering son (Jason Ritter), and her husband is a recovering alcoholic. Let the interpersonal eamy-squeamies ensue! Renton, whose company is called “Certainty Films,” is a physiotherapist-turned-filmmaker who assures us that “We have the opportunity to take a dive into their lives, laugh and cry with them and hold compassion for the tightly held external façade unraveling right before our main character’s eyes.” Gratefully, “The Perfect Family”‘s many lessons are parceled out with slightly more grace than that sentence. Non-practicing audiences are likely to find the ubiquitous cross pendants and religious appurtenances a distraction. With Richard Chamberlain as local priest Monsignor Murphy, who beams mightily before popping his eyes at the line, “What is it with young men these days!” With Elizabeth Peña, Sharon Lawrence and June Squibb as “Mrs. Punch.” 84m. (Ray Pride)