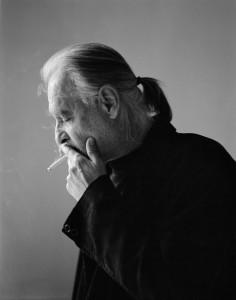 Godard famously quipped that a movie has a beginning, a middle and an end, but not necessarily in that order. A Béla Tarr movie has rain, wind and despair, but not necessarily in that order. The Hungarian director of “The Werckmeister Harmonies” and “Sátántangó” says he’s chucking it in, at the age of fifty-six, with this Last Testament of High Miserabilism, and it’s an epic (and intimate) place at which to choose to end. It’s a fierce, glorious slog. In thirty shots that comprise the 146-minute running time of “The Turin Horse,” cinematographer Fred Kelemen, an ace director of the dark and brooding in his own right (“Abendland”) charts the light and dark of six days of increasingly dismal weather as an elderly farmer and his daughter watch their workhorse lose its will to live on their isolated rural homestead. It’s 1889, and it’s always, and it’s never. It’s a lustrous hell on earth, an apocalypse both minor and major, with little but boiled potatoes and plum brandy to stave off extinction. Kelemen has said that the production worked with theater-style dimmer boards for the lighting, enabling unusual flexibility across the extended duration of the takes. “In this world there is no other world than this one,” Kelemen told Robert Koehler in Cinema Scope magazine. “There is no escape. It does not matter where you are, but who you are and how you deal with yourself and others, and the conditions of life of which death is surely an integral part.” And yet! It’s one of the most fascinating film experiences of the past year. Some call it a masterpiece. I couldn’t imagine it without Mihály Vig’s score, which gives the cumulative horror a pulse, and perhaps even its heart. Co-written by László Krasznahorkai (“Sátántangó”); co-directed and edited by Tarr’s partner, Agnes Hranitzky. With Janos Derzsi, Erika Bok, Mihaly Kormos and the horse, Risci.  146m. (Ray Pride)

“The Turin Horse” opens Friday at Siskel. The trailer below offers a taste of the film’s visual glories.