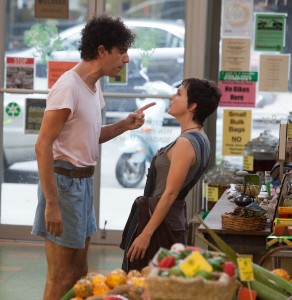 Snort-out-loud funny and offensive in every conceivable way, “The Dictator” cheerfully cons its audience into cheering on a genocidal totalitarian in his quest to deter the nascent tide of democracy in his fictional kingdom.  British comedian Sacha Baron Cohen’s made a career out of his singular brand of “documentary” ridicule of simpletons of a right-wing, usually Southern U.S. persuasion, through fictional alter egos, Ali G, Borat and Brüno. He’s gotten a pass on borderline classist cruelty because he was so self-demeaning in the process, willing to lower himself beneath his victims’ level and, well, who doesn’t love to feel superior to those rightwing nutjobs who seem to control American discourse, right? But his shtick became all too familiar once he migrated from television to feature films, and his second go, “Brüno,” was greeted with Bronx cheers even from his basest base. With “The Dictator,” Cohen’s gone full-frontal fiction, creating the character of Aladeen, an amalgam of a rogue’s gallery of strongmen (the picture’s dedicated to Kim Jong-il) that does not fall so far from the Borat tree, with a decidedly Qaddafi-esque Middle Eastern tincture. After an establishing series of preposterously sadistic and self-glorifying acts (the trailer features his path to track-and-field glory, when he proves that a pistol juices results far more effectively than steroids), he ends up disenfranchised in America, conjuring up everything from “Roman Holiday” to “Coming to America.” Cohen the Barbarian, anyone? But with this American foray, Cohen turns on his own with a takedown of left-liberal urbanity when his character winds up in the clutches of an indie green food co-op, with all its attendant trappings of granola-ism, humanism and pacifism. Shooting wild-caught fish in a barrel perhaps, but scatological hilarity ensues nonetheless. When he gets around to realizing the implicit reference to “The Great Dictator,” though, his big speech takes down neither Nazis nor contemporary threats like the growing power of the human-rights agnostic Chinese, but the great war machine of our time, the self-righteous US of A. The only target seemingly off-limits here for Cohen is Israel, and his depictions of the denizens of his fictional Wadiya reinforce Western stereotypes of Arabs as monolithically greedy, vulgar and anti-Semitic. Still, I was laughing too hard to think too much about that. 83m. (Brian Hieggelke)