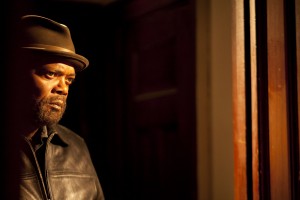 There are volumes yet to be written about characteristics in movies like “Canadian-ness” and “amateurishness” that would be well served to include a couple of the not-so-rare examples like “The Samaritan” in the proposal pack. Working for a second time with producer Andras Hamori (“The 51st State”), Samuel L. Jackson takes a hike to Hogtown as Foley, a conman-murderer who’s looking for a new beginning after twenty-five years in stir. Shot in an economical five weeks, co-writer-director David Weaver’s “The Samaritan” shares peculiarities of pacing and raggedness of tone that inhabit Canadian movies from low to high, and you have to ask at moments, is this just odd, piquant, or is it simply bad? The side streets and backstreets of Toronto have unexplored grit and color hardly glimpsed in U. S. movies having the city pass for an every-nowhere, and a neat neo-noir could be made there, if not for the eccentric feel. It’s not an otherness, strangeness, just… peculiar. The nudge-cum-punches of violence weirdly lack punch—inserts of unconvincing splatter after a mauling—and the overall pulp putrefaction lends itself to that kind of post-Tarantino effort best described as “Not Tarantino.” (And the kind of post-Soderbergh high-definition film, very fond of deep pools of yellow, which could be called “Not Andres Serrano.”) Jackson has his moments, but not all of them seem to be from the same movie. Plus, he’s a man who witnesses a murder less than twenty-four hours after getting out of jail who can’t help but stay near the free-flowing whiskey, neat, and the spurts of red décor that lead all the way to hell. A flawed character would be better than an implausible ready mark. At least his leading man is granted a full-on erotic life. With Deborah Kara Unger, Ruth Negga, Tom McCamus, Martha Burns, Luke Kirby and a lazy but pleasingly camp, cruel, vinous Tom Wilkinson. The simple, lovely score, far, far more restrained than the film, is by Todor Kobakov.  90m. Widescreen. (Ray Pride)

“The Samaritan” opens Friday at Facets.