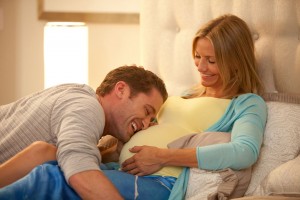 Push, push, push. Note there are no exclamation points. The three birth scenes that punctuate the last act of the lackluster “What To Expect When You’re Expecting” are anti-climactic. Five couples await a “miracle.” If you’re counting, there is one miscarriage and one adoption. The ensemble design of this so-called “kaleidoscopic comedy” with a ticking clock recalls 2011’s “New Year’s Eve,” which at least intertwined the storylines of its couples. Here the parallel editing and inter-character links offer little more than everyone ending up at the same hospital. That night water breaks. Everyone except viewers sees that little puddle in a hallway. No bodily fluid or solid is seen, except for some pink vomit that lands in a crystal vase awarded to a Celebrity Dance Factor winner with morning sickness. Director Kirk Jones (“Waking Ned Devine,” “Nanny McPhee’) inadvertently furnishes an appreciation for gross-out comedy: You really do need to show the pee, poop or puke to get those guffaws. True, there is one small fart. Heidi Murkoff’s 1985 book, adapted here by writers Shauna Cross and Heather Hach, makes only one cameo, unlike Steve Harvey’s book endlessly plugged in the recent relationship comedy “Think Like a Man.” Rent “Babies” (2010) if you want to feel good about birth. With Cameron Diaz, Jennifer Lopez, Elizabeth Banks, Chace Crawford, Brooklyn Decker, Anna Kendrick, Matthew Morrison, Dennis Quaid, Chris Rock, Rodrigo Santoro, Ben Falcone, Joe Manganiello. 110m. (Bill Stamets)
“What To Expect When You’re Expecting” crowns Friday.
Ray Pride