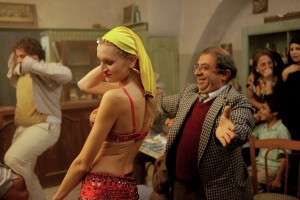 An art-house jaw-dropper, Canadian filmmaker Nadine Labaki’s “Where Do We Go Now?” (Et maintenant on va où?) manages to annoy and offend in almost equal measure in its many miscalculated scenes, from cultural caricature to musical numbers and back again. The opening scene, a dance tableau that seems like it could be drawn from the 1960s choreographic masterworks of Hungarian filmmaker Miklos Jancso, promises more than the Greek-myth-set-in-unnamed-Middle-Eastern-country-pssst-it’s-Lebanon ever manages to deliver. In a dusty mountain village, Muslims and Christians live side-by-side in a cute form of peace and tolerance until random slurs and misconstrued accidents lead to battle and beatings and deaths and weeping and gnashing among the very cute elders and equally cute youth. Oh! Did I mention the Ukrainian strippers! Not even the down-at-heels apparition of their wantonly ordinary blondeness can stem the tide of contrivance in this chattering village of intolerable women. In the town’s only café, a fantasized tango between the shy-but-manly jack-of-all-trades and the café’s owner (Labaki) has hazy charm, but it’s all herky-jerky hubbub and hair-trigger vaudeville, at least until the extended song sequence, “Hashishet Albi,” where the women gather to make hashish-laden sweets to poison the men into laughter and tolerance once more. (“Take the best hash, worth its weight in gold.”) Labaki also directed and acted in “Caramel,” and her way with dramatically illuminating variations of eyeliner and eye shadow invariably compliment her substantial and genuine beauty. I mean this kindly: her sly onscreen charm trumps her bumptious behind-the-camera talents. Winner of the Toronto International Film Festival 2011’s Cadillac People’s Choice Award (Best Narrative Feature) 100m. (Ray Pride)

“Where Do We Go Now?” opens Friday at the Music Box and Evanston CineArts. A trailer is below.