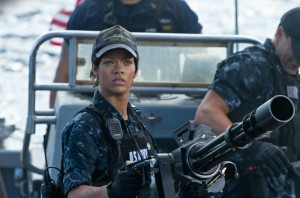 “Battleship” begins with an out-of-work screw-up eyeing an out-of-his-league blonde in a Hawaiian bar after the kitchen closes. Sam (Brooklyn Decker, also in this week’s “What to Expect When You’re Expecting”) wants a chicken burrito. Alex (Taylor Kitsch, “John Carter”) woos this admiral’s daughter by breaking into a nearby mini-mart and getting her one. By the end, her father (Liam Neeson) will invite future son-in-law Alex for a chicken burrito lunch. That all-American romance takes up about four minutes of this dumb loud spin-off from a 1943 game now owned by Hasbro. The true love of director Peter Berg (“Hancock,” “Friday Night Lights”) is the U.S. Navy and alien weaponry. Outgunned earthlings will outwit extraterrestials, thanks to a misreading of the ancient Chinese treatise “The Art of War.” Screenwriters Jon Hoeber and Erich Hoeber let a Japanese naval officer correct an American naval officer, who knows his Homer, on that score. The only other joke at the expense of this no-brainer is when an astrophysicist reacts to a “save the world” line by asking, “Who talks like that?” He’s also the one who forecasts the aliens will do unto humanity what Columbus did unto Indians, and conquistadors unto Incas. Fans of “Battle Los Angeles” and the “Transformers” and “Terminator” series will see routine recycling of elements, besides alien metals not found on the periodic table. The sound design of the warcraft from Planet-G and the reptile-eyed, cyborg-suited operators is overdone with too many whooshes, clunks and zzbbitts, plus shock blasts lifted from “Inception.” Interest in the visitors, one of whose off-course craft kills 25,000 in Hong Kong, is only expressed by window-smashing protestors glimpsed in a two-second news clip bannered “Public Demands Disclosure,” and by a Pentagon wonk who inquires of our hijacked deep space satellite transmitters, “Who’s communicating what to whom?” That maybe better to apply to odd lines like “This is a head-stomper” and “Somebody’s going to kiss the donkey.” Universal Pictures Publicity Department asks reviewers to zip it lest they sink ships: “we request that you not reveal plot points toward the film’s climax and conclusion.” Not to ruin anything but I cannot imagine what those might be. Other than, per my earlier spoiler, the guy gets the gal. With Rihanna, Tadanobu Asano, Hamish Linklater, Alexander Skarsgård, Greg Gadson. 131m. (Bill Stamets)
“Battleship” opens Friday.
Ray Pride