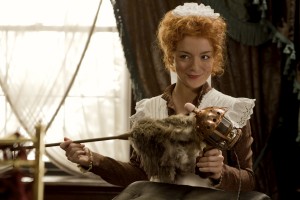 Period films, at their best, are always about the present, I suggest. “Of course!” Wexler says. “Like science fiction films are always about the moment filmmakers make it. It’s as much about the moment you’re in as the moment that was.” It’s been seven years between the writing of the script and its arrival in theaters this week. “Yes, that is the crazy thing,” says the fast-talking, effervescent forty-one-year-old Chicago-born writer-director. (The late developer Jerrold Wexler was her father; she’s also the niece of cinematographer Haskell Wexler and half-sister to Daryl Hannah.) “There’s a scene in the classroom where Maggie’s character, Charlotte, says to [Hugh’s character], essentially, ‘I know there’ll be a time when women have the vote, the rights to their own bodies,’ blah-blah-blah. And I remember when it was written, and when we filmed it, and even when we showed it in September [2011] in Toronto, that scene made me feel like, ‘Oh, see how far we’ve come! And my heart filled with, ‘That’s so great, she sees the future, and aren’t we all so proud!’ And I remember people, even Maggie at a press conference at TIFF, saying, ‘Obviously Charlotte’s politics were really radical for the time, but now, looking back, everyone agrees pretty much on these things.’ Flash forward a few months and that scene went from being a kind of look-what-we’ve-done, filled-with-pride [moment], to ironic maybe-not-so-much. We don’t have the rights over our own bodies! It’s weird to me; it’s not what we expected, and not what the writers wrote necessarily, right? It’s not what we expected to be talking about [now].” 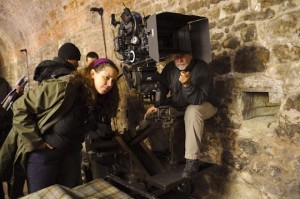 The word of the title, “Hysteria,” is still used to dismiss women’s actions. “You’re being hysterical.” Being able to reinforce guilt and causing you to question feelings about yourself is a form of power. “Absolutely. The joke of the movie is not, ‘Ha-ha, vibrator!’ The joke is, ‘I can’t believe they really did this, right?’ And then the kind of common cultural denial of the truth that’s right in front of you.  I think I had to learn just how absurd it was that I was so nervous and uncomfortable [in my own life]. I don’t think I look down on us, or the audience, because I think that a lot of people always ask questions like, isn’t it silly that we’re this… I’m not immune. Only recently have I kind of gone through the looking glass on some of this stuff. Like, why are we so uncomfortable about what our bodies evolved to do? Why is it the thing that makes us the most embarrassed and uncomfortable is the thing we carry around with us all day? Our physical body parts are as natural as anything. I’d think, ‘Why is this an issue?’ And then I think the vibrator thing, it’s like, the vibrator’s in the movie, and I get all the jokes and the laughter, but I’ve gotten to a place now where I always have a bunch of vibrators with me! I’m always giving them out to people. Little jokey ones, ones that say, ‘What The Doctor Ordered.'”

Laughing is good. “Yes. There’s this way in which the best thing we can do is to have a sense of humor, to get comfortable, to relax. ‘Cos that just creates an atmosphere. So that’s why I wanted this film to be a comedy, an entertainment, to be pleasurable, and joyful.”