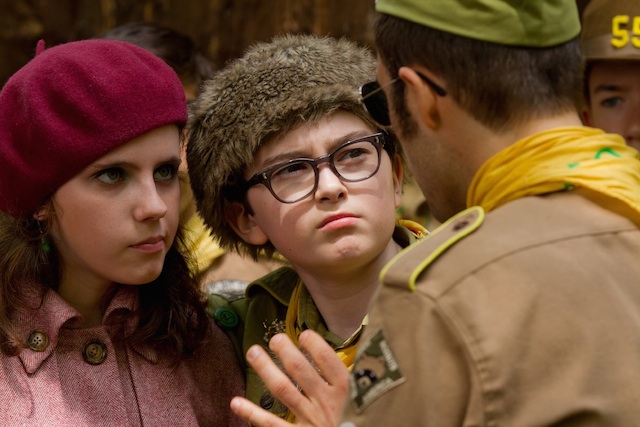 A list of readily identifiable possible influences streaming into Wes Anderson’s symphonic romance “Moonrise Kingdom” would quickly become a trainwreck at the cinémathèque. (Think “outlaw couple” and rummage further from there.) And yet, it’s great, it’s thrilling, it’s moody, it’s marvelous, it’s A Big Golden Book of Wes; an encyclopedia of All Things Anderson.

Childhood, the past: memory, an island. It’s 1965, the year Jean-Luc Godard’s apocalyptic Nouvelle Vague runaway-lovers tale, “Pierrot le fou” was released. We’re transported emphatically onto a seemingly remote New England island in summer, where two twelve-year-olds fall in love, run away into the impossibly complex wilderness and leave a community of adults behind, a weave and weft of authority of childlike demeanor that includes parents and “Khaki Scout” scoutmasters and a sheriff and a narrator and a child-safety bureaucrat named only “Social Services.” Information comes at us in a fashion formal yet berserk: the cast includes a welter of stylish performers from all manner of styles, and they mesh beautifully.The two dutiful, beautiful newcomers, Jared Gilman and Kara Hayward, fully inhabit the story of Sam and Suzy, who, like the lovers of Nick Ray’s “They Live By Night,” “this boy and this girl were never properly introduced to the world we live in.” The cast includes Bill Murray and Frances McDormand, Edward Norton, Bruce Willis, Bob Balaban, Tilda Swinton, Jason Schwartzman and—and!—Harvey Keitel.

Anderson introduces his shadow-play, shadow-box narrative while his camera scales and slap-pans the home of young Suzy (Kara Hayward), where he introduces a palette of intense yellow that partakes of the film’s super 16mm bold grain, but also an organic, fibrous feel, less fabric than faded storybooks that would be soft to the touch, as well as grades and shades of orange and rust that would have burned into the brain of a man of his age since five. We glimpse a line of encyclopedia volumes along a wall of low shelves: not twenty-four or forty-eight but far too many, double or triple the number of volumes that would have contained a summa of the world’s known knowledge to that year. While the colors are bold, any chance of jewel-box opulence is mussed by the super 16mm film grain: it’s gloriously, grimily celluloid in front of you, even in digital projection.

But so much is suggested beyond this miniaturized proscenium of the dollhouse. The eyes and ears drown gratefully, as in the otherworldly worlds of Michael Powell and Emeric Pressburger that include “A Matter of Life And Death (Stairway to Heaven).” Their “Black Narcissus” comes to mind when the island is scoured for the runaway kids in a medium-long tableau of three figures that includes a barefoot nun in a knee-length white shift: who is she, why is she dressed so formally and so casually? Near every frame holds such curiosities, like a Cornell-cum-orgone box to be regarded near, and far, near, and far. 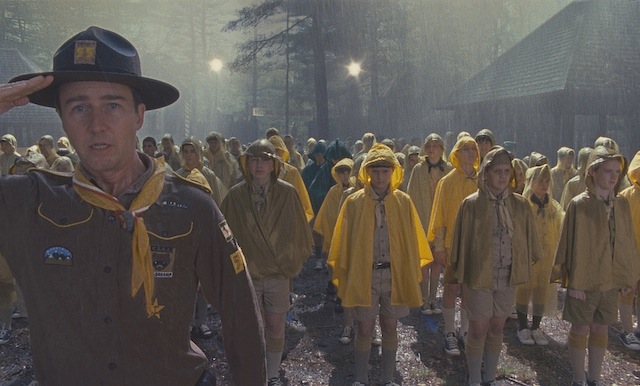 Endlessly subjective to the kids’ fantasy of the world around them, a memory in mind compacted from impressions half-glimpsed, Anderson confects and even perfects a headlong heaven’s-to-Etsy esthetic, in hothouse glory. Part of the girl’s explosion into febrile, prehensile urges of adulthood was prompted by finding a booklet atop her parents’ refrigerator, “Coping with the Very Troubled Child.” Writ large, grown tall: Anderson also structures the movie around an instructive piece by Benjamin Britten called “The Young Person’s Guide to the Orchestra,” and it’s so spot-on it should not work, nor should the incorporation of Britten’s “A Midsummer Night’s Dream, Act 2: ‘On the Ground, Sleep Sound.'” But it does.

Winningly, the pair are both confidently declarative yet garble-mouthed. They’re kids who don’t know and wouldn’t care you’re looking: this is their moment they’re in. Hayward and Gilman have the elocution of that moment just before the world asks, “What on earth do you think you’re talking about?” that is by nature followed by an irritated, “Pipe. Down.” It’s more densely Anderson’s own stuff than ever, and it’s thrilling in so many ways. The climactic Great Flood, the hormonal tsunami that descends on island and inlet, is a subject for much further discussion. You can only scratch the surface of the surface in 850 words.

And Anderson, it’s bracing to realize, is still so young. For the love of Scott Rudin and God, Anderson will only get better. (Rudin is Anderson’s producer, as well as the protector-collaborator of the Coen brothers, Trey Parker and Matt Stone, David Fincher, Aaron Sorkin, Noah Baumbach and so on and so forth, oh my.) All that’s missing is writer-actor-childhood muse Owen Wilson, who Anderson says will be in his next, European-set venture, which he hints at being a grownup picaresque. A variation on James Salter’s melancholy sexual roundelay, “A Sport and a Pastime,” if you please? Anderson knows where he’s going. I’m grateful to follow. I could go on and on and on. But I need to see “Moonrise Kingdom” again, straightway, maybe Friday, Friday night. Friday afternoon.