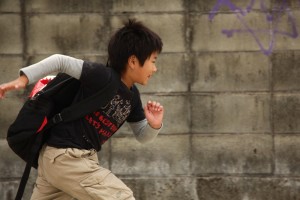 Director-writer-editor Hirokazu Kore-eda (“Still Walking,” “After Life”) crafts another humanist narrative about family. The young first-time actors are adorable, unaffected and not at all Disney-like. “I Wish” (“Kiseki”) is lighter than “Nobody Knows,” his 2004 film based on 1988 news accounts of a twelve-year-old boy caring for his three younger siblings in a Tokyo apartment for months on their own. “I Wish” relates how a twelve-year-old boy living with his divorced mother in Kagoshima reconnects with his younger brother living with their father in Hakata. When a new bullet train line opens, the resourceful kids scheme to buy tickets to the town where trains pass. There is already lore that wishes made at that precise moment will come true. School will be skipped as sixth graders and fourth-graders converge with their various yearnings. It all makes for a touching adventure that never over-sweetens its tone. With Koki Maeda, Ohshirô Maeda, Ryôga Hayashi, Nene Ohtsuka, Jo Odagiri, Yui Natsukawa, Masami Nagasawa, Hiroshi Abe, Yoshio Harada, Kirin Kiki, Isao Hashizume. 128m. (Bill Stamets)

“I Wish” opens Friday at the Music Box.