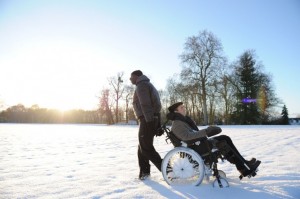 “The Intouchables” opens with a tease: a young Senegal-born driver expertly speeds through Paris late at night. His grey-bearded passenger looks like a world-weary Robert De Niro. Cops give chase. In pursuit of a pair of operatives in a thriller? Most of the uplifty plot by co-writers and co-directors Eric Toledano and Olivier Nakache goes back to the meet-cute of Philippe (Francois Cluzet), the very wealthy quadriplegic in the backseat, and Driss (Omar Sy), the unqualified ex-con he hires as his live-in caretaker at his palatial residence. It is too easy, if necessary, to tally all the tropes of race and class that are bundled into this odd-buddy premise and its payoff. Driss goes unquietly to the opera. Thinks “Berlioz” only names a housing project. Mocks pricey abstract paintings, then splatters one of his own that Philippe tricks a dealer into buying for 11,000 euros. Culture rubs off uptight Philipe onto uncouth Driss. Both become better men in the bargain. Driss mentors his widower employer in courting a pen pal and in disciplining his bratty adopted daughter. He also hips the staff to Earth, Wind and Fire. What is amazing is how easily this fact-based fable entertains. How blithely it paraglides over outcrops and downdrafts of political correctness. As if to shrug off the finders of offending clichés, the end credit’s home-movie clips of the original duo serve as a ‘c’est la vie’; as you can see for yourselves. With Anne Le Ny, Audrey Fleurot, Clotilde Mollet, Alba Gaïa Kraghede Bellugi, Cyril Mendy, Christian Ameri. 113m. (Bill Stamets)