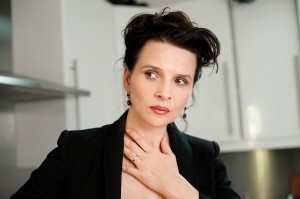 Juliette Binoche stars in Polish director Malgoska Szumowska’s unabashedly explicit “Elles,” a tactile and direct assay of female sexuality. Anne (Binoche) is a Paris journalist researching a magazine article about student prostitutes. Amid her daily life as wife and mother, Anne becomes more fascinated by the stories of her subjects’ experience, which we see in ruthless detail. (Szumowska has worked with Lars von Trier and Peter Aalbæk’s Zentropa for a while, including on “Antichrist”; they’re among the European co-producers.) Anne lives in a splendidly appointed bourgeois charnel house of a flat, the likes of which have not been seen since Dean Tavoularis’ for Polanski’s “Carnage.” The head-on perspective of the couple’s dining room is all too similar to the Brooklyn apartment in that film, and some of the corridors of other apartments have a Polanskiesque affect. Co-screenwriter Tine Byrckel has name-checked Virginia Woolf’s “Mrs. Dalloway” as an influence, with Anne’s preparations for her day and for a dinner party akin to the day of that book’s structure. As Binoche recovers from her journalistic explorations and fantasies, we discover her, no makeup, in crumpled pricey pajamas loose robe, in the clean white light of her kitchen, startlingly beautiful, but her character distracted and soon distressed. (Anne’s masturbation scene, clothed, in those same pajamas, feels as explicit as the rites her subjects go through with their johns, although the preceding scene is brutal.) Szumowska also invokes Godard’s career-long theme that all women’s work is commodity, but her sense of light and motion is more profound than the briskly didactic dialogue. The climactic dinner party brings the story back to Anne’s world. The camera floats. Music rises. Lucian Freud’s name, an anecdote, familiar to all, rises in chatter. “It’s just a trivial story,” one says. “It’s an amazing story,” another adds. Is it about the rendition of flesh, the marketing of representation? The telling trails off. Traffic sounds, voices, birds, rise from the city as surely as Vivaldi or Beethoven, from the stereo. With Anaïs Demoustier, Joanna Kulig, Louis-Do de Lencquesaing, Krystyna Janda, Andrzej Chyra, Ali Marhyar. Jean-Marie Binoche, François Civil, Pablo Beugnet, Valérie Dréville, Jean-Louis Coullo’ch. 96m. Widescreen. (Ray Pride)

“Elles,” rated NC17, opens Friday at the Music Box. A NSFW trailer is below.